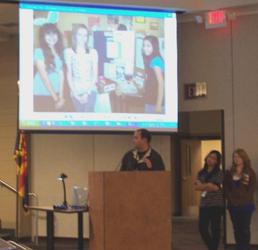 Expository writing deals with explaining information; it doesn’t tell so a story, so it’s not generally a favorite among students. Unless, of course, they are in Joe Szoltysik’s seventh and eighth grade class at Maricopa Wells Middle School and do a toy-making project.

Szoltysik directed his students, who worked in groups of three or four, to sketch, design, test and market a “new toy for hopeful release by December 2010.”  In addition, students had to create instruction manuals for both assembling and operating the toy, a brochure advertising it, as well as a report explaining the toy’s features and benefits to present to a “committee of potential buyers.”

Each toy had to have at least one moving part, and a suggested age range for the toy had to be determined to target the intended audience or buyers. “We used all recycled materials,” said Szoltysik. “I told them to bring all their junk from home, and they did!”

Brochures needed to include the name of the toy, a slogan and illustration, the cost of the toy and how it could be purchased, online or in stores.

The expository or informative report provided a brief overview of each group’s toy, the materials needed to make it, its cost and what it could do. Graphs, charts and data were suggested as elements to include in order to help sell the toy.

Groups presented their toys to classmates and teachers, and Szoltysik scored the projects on a 350-point rubric.

“Counting repeat visits, over 1,000 students came to my classroom to view the toys,” Szoltysik said.

Expository writing may not always be fun, but it can be—if you can write your own “toy story.”