The NAACP of Pinal County is urging residents not to participate in a “day of community support for the Black Lives Matter movement and the ongoing revolution” planned for 7 tonight in Maricopa. 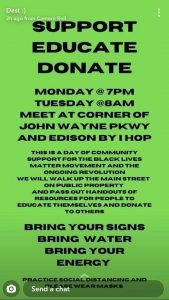 A flyer circulated on social media promotes gatherings tonight and at 8 a.m. Tuesday at the corner of John Wayne Parkway and West Edison Road near the IHOP restaurant.

Headlined “SUPPORT EDUCATE DONATE,” it reads: “We will walk up the main street on public property and pass out handouts of resources for people to educate themselves and donate to others.” The flyer, which reminds participants to practice social distancing and wear face masks, does not include the word “protest.” No organizing body is mentioned on the flyer.

In a statement posted on Facebook late Monday afternoon, the NAACP asked people to stay home from the event, which it called a protest.

“The Pinal County NAACP has not been able to confirm that this is a legitimate gathering or whom the organizers are,” said the statement, signed by Constance Hunsberger Jackson, chapter president and city resident. “We have seen reports of nefarious characters of ill intent who seek to sow division during these troubling times all over the county. In an effort to keep our community safe we are asking people to stay home and not participate in this event.”

The legitimacy of the event could not be independently confirmed by InMaricopa.

There was a small police presence at the IHOP on Monday evening 90 minutes before the event was scheduled to take place. The restaurant remains closed from the stay at home order to prevent the spread of coronavirus.

The NAACP is planning its own solidarity event and said more details are forthcoming. It also offered some advice to those considering joining a protest.

“Please know we support any efforts at peaceful protest, so please be sure if you so choose to attend any protest: research and know the organizers, stay safe at all times, make sure you have ID with you, and know your rights.

“Please take care of yourselves and others,” the organization said.

Police told InMaricopa they are not releasing any further information.

The state is under a week-long curfew that began Sunday night. It was part of a Declaration of Emergency declared by Gov. Doug Ducey in an effort to prevent the looting and violence seen in Phoenix and other U.S. cities in recent days.

Ducey tweeted Sunday afternoon that he was taking action at the request of local leaders and in coordination with state and local law enforcement.

Letter: Marsh stands above the rest