Whether to return to all-online learning or continue the status quo became a moot point for Maricopa High School this week. An increase in COVID-19 cases combined with community spread in the city at large prompted administrators on Monday to cease in-person classes at MHS for the rest of the semester.

This month, Maricopa Unified School District had received feedback from teachers, parents and students about the best format for continuing classes at least to the end of 2020. But the governing board had not contributed a decision.

Desert Wind Middle School and Maricopa Elementary are currently online only until Dec. 7 due to staff shortages caused by COVID-19 quarantines. Maricopa Wells Middle School just returned from a closure. Pima Butte Elementary, Saddleback Elementary and MHS have all had previous closures.

The ongoing uncertainty is expected to last well into second semester.

Across the district, feedback has been mixed but passionate. Many are staunchly for online only. Others are staunchly for all in-person. Some have campaigned for a hybrid model that puts most students on campus for a couple days a week and online for the other days of the week.

“Kids and parents need the choice to do what’s best for them,” Stephanie Ross responded to an InMaricopa social media post.

In calls to the public at the Nov. 18 board meeting, teachers who sang the praises of in-person classes conceded the disruptions of quarantines and difficulties of concurrent teaching have made the in-person model more stressful and encouraged the district to go all online through the holidays.

From Pima Butte Elementary, a school that had to shut down for two weeks, teachers Denise Palmer and Michelle Fisher told the board it is in “the best interest of the students to remain in class as long as possible.” 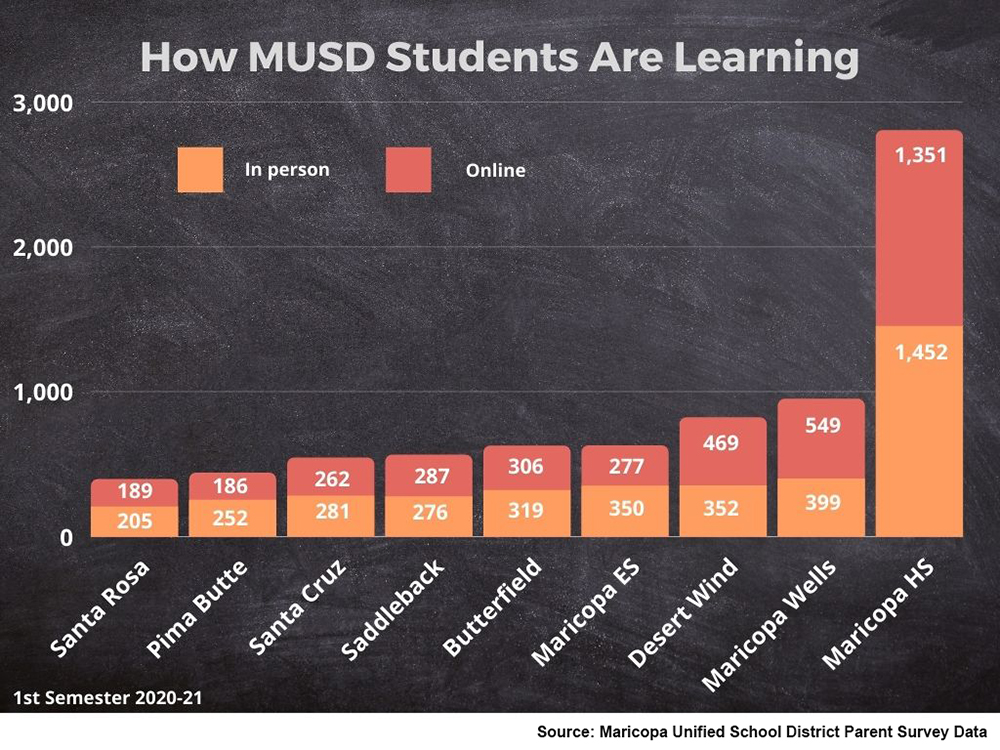 Since returning to class, they wrote, students are more engaged and “showing social, emotional and academic growth.” A hybrid model, they said, would cause undo hardships.

Parents accused the board and administration of being reactive instead of proactive in their decision-making.

A group of high-achieving seniors at MHS had sharp words for the board, writing that their grievances were “falling on deaf ears” with the administration offering only cookie-cutter responses, and said they as a student body were being dismissed as indifferent.

“To even think we are apathetic is outrageous,” they wrote, instead describing themselves as “upset, disappointed and stressed.”

The ongoing learning model had about half of the students voluntarily learning from home and half in class. Many MHS classes were taught concurrently, meaning teachers in the classroom were teaching in-person and online simultaneously, causing students to be disenfranchised while missing part of the lessons.

“This district and this community [have] proven it doesn’t have the guts to stand up and do what is right for the students,” the seniors wrote. “It would rather cower to the interest of the few who see this as a hoax, who believe teachers are not living up to the expectations and thus ignore the countless struggling students, teachers and families.”

One parent expressed dismay that his special-needs child would not receive the free education he was due if all classes go online. Another stated his daughter’s grades were adversely affected by switching from online to on-campus because of two necessary schedule changes that changed three of her teachers twice.

Melissa Rae Laborin responded to InMaricopa: “There are so many kids falling behind and suffering from being at home and not having the access they need to materials and one on one contact with teachers. This needs to end now.”

Parents and teachers mentioned unsustainable levels of stress in the current learning model.

After conducting a staff survey Nov. 9-16, MUSD Human Resources Director Tom Beckett said more than 94% participated. Of those, 81% said they were “comfortable” with their current assignment. The other 18% were unhappy.

Of the 430 respondents, 249 supplied written comments for the administration, and Beckett said he was reading each one.