Millions of U.S. families hunkered down together under stay-at-home orders in March, April and May.

Parents worked from home, using Zoom to dial into business meetings – and stay in touch with family and friends.

Children learned at home with Google Classroom instead of in a school classroom.

In cities and towns across America, including Maricopa, household internet usage climbed in a big way.

Preliminary estimates indicate internet traffic jumped from 50% to 70%, with streaming up by at least 12%, Forbes reported. TV watching and streaming by U.S. children skyrocketed, as much as 300% at mid-day, for 6-11 and 12-17 age groups, according to a Nielsen study.

Average in-home data usage was up 18% for the first 17 days of March from a year ago, according to Comscore, which measures cross-platform audiences. Most of that increase was on mobile phones, smart TVs and speakers, and streaming boxes and sticks, it said.

The increase since the pandemic isn’t too surprising when 53 percent of U.S. adults called the internet essential for them personally, according to a Pew Research Center survey from early April. Another 34 percent said it was “important, but not essential.” 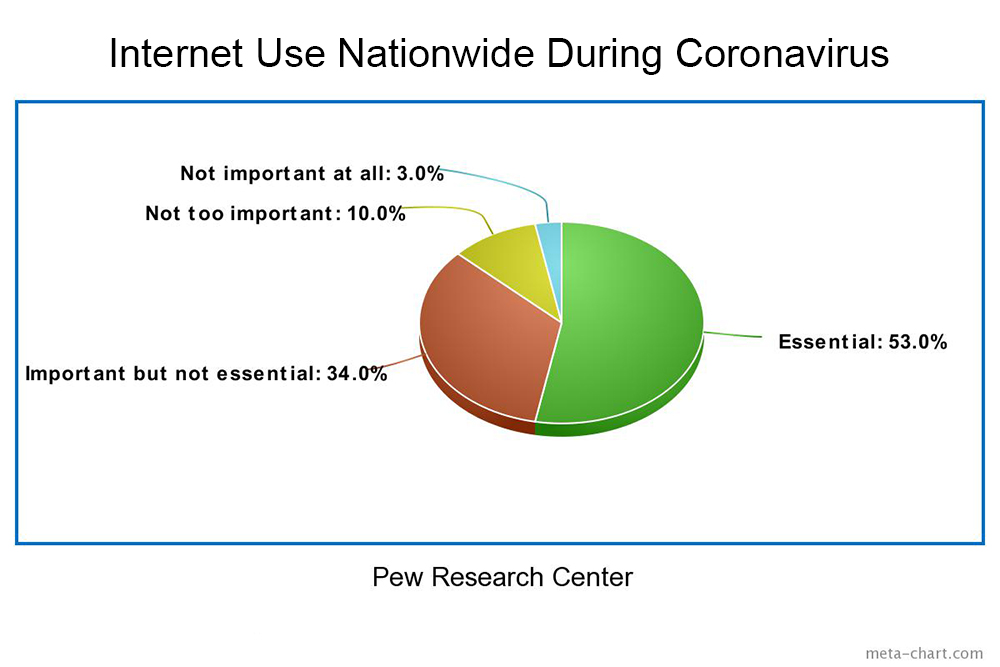 A HOUSEHOLD GROWS TO 10

The internet is essential in her household, said Senita resident Danika Pulido.

Still, as the calendar flipped to 2020, home internet life was calm and efficient. A 25 megabits per second (mbps) line from CenturyLink delivered enough broadband speed to keep devices running smoothly.

But the onset of coronavirus triggered several developments, said Pulido, 44, who has lived in Maricopa since 2008 and operated an at-home daycare, Your Big and Small Childcare Need, until schools closed.

Her household suddenly grew to five adults and five children (and six phones, four tablets, three computers and seven smart TVs), and began to lean more heavily on the internet for work and play. The family was forced to police its online activity as computer games lagged and Netflix and HBO buffered, not to mention YouTube, a platform that plays a vital role at home.

Pulido said her second youngest son, who is autistic, spends hours watching fireworks videos on YouTube for daily stimulation – both on his phone and smart TV.

“The internet is really important,” she said. “I really need it for my son. He wants that internet 24-7 without buffering or freezing. It’s not easy for him to understand.”

Others needed it, too.

Her 25-year-old daughter, the only one who left the house during quarantine to work at an essential business, was on the home computer for Air Force Reserve duties. Her boyfriend, manager of a creative services firm in Tempe, moved in for the stay-at-home order and worked from the house.

Pulido’s oldest son, 27, who came out of the Marines in December and lost part-time jobs in California in the aftermath of the pandemic, moved into her home with his two children, one of them a kindergartener whose learning went online when schools closed. Her son competes in paid e-sports tournaments for League of Legends.

“He had to go to my mom’s house a couple blocks away to play in his tournaments and do job interviews,” said Pulido, who found herself jumping off wi-fi and using her cell plan to go online.

So, Pulido had a second 25 mbps line installed. It didn’t solve the problem completely, so she decided in late April to swap the second line for an 80 mbps fiber optic line from Orbitel. Peace ensued.

“The kids are saying ‘It’s not buffering anymore,’” she said.

She will likely remove the initial 25 mbps line at some point, confident smooth streaming will continue.

We use the internet in nearly all aspects of our lives. Facebook, Hulu and Fortnite. Streaming, texting and Zooming. On cellphones, laptops and tablets. Smart TVs, Nest thermostats and cameras, and Ring doorbells. Even smart dishwashers, coffeemakers and refrigerators.

The proliferation of devices and more new homes rising across the city means internet demand in Maricopa is always growing.

Before the virus, service providers across the nation generally described a “rush hour” of home internet traffic from 7 to 11 p.m., the time most people go online. And when your favorite show was most likely to buffer.

But the pandemic of 2020 has taken that growth to new heights, as families expand the way they use the internet and spend more time online.

“That has absolutely caused an increase in usage,” said John Schurz, president and general manager of Orbitel, the only internet service provider with an office in Maricopa.

Pre-pandemic, Orbitel would see a bump in usage at 3 p.m. when schoolchildren got home, then again at 5 p.m. as people who work in Maricopa got home, and then the largest bump as out-of-town workers returned an hour or two later, before holding steady until midnight or so.

“Now we’re seeing steady usage across the day, and a bump at night for streaming,” Schurz said.

Another factor: snowbirds, who represent about 30% of Orbitel’s business. Many stayed put in Maricopa instead of returning to their summer homes in March and April.

“Canada, for instance, gave their residents a (March 20) deadline to get home, but a lot of people stayed here,” Schurz said.

It got so bad at Chayo Reed’s home during the quarantine, she had to make changes, too.

Every weekday morning, five desktop computers would flick on in her home in the gated community of Homestead. Her husband, who works for Chase Bank, worked from home and her three kids were online doing schoolwork. Her father entertained himself by researching family history on the internet.

In the evening, the family streamed Disney+ and Prime Video on their Roku devices and played games on the PS4, she said.

“We are all using the internet basically all day long,” she said.

Their original broadband connection, a 100 mbps line from Orbitel with a Netgear modem/router, “worked just fine with our simple setting,” handling the nighttime demand well, said Reed, 38, noting there was little daytime demand while she worked at Ross department store, her husband was at the office and the kids in school.

“Then the pandemic happened,” she said. “And we all had to stay at home all day long. With school and work, our internet needs increased; 100 mbps wasn’t enough.”

“Sometimes, we would just join the calls by phone so that at least we could hear everything,” she recalled.

The Reeds took action, upgrading to a 200 mbps line and a Nighthawk router to keep the wi-fi signal strong throughout the house, she said. Problem solved.

The additional cost is worth greater internet harmony at home, she said, adding she’d hesitate to downgrade in the future unless she was sure the current performance would continue.

Aimee Marquez, a resident of Rancho Mirage, acknowledged the internet can dominate children’s time – both for good and not-so-good. Her son Samuel, 10, a student at Leading Edge Academy, is doing his homework online, but YouTube, FortNite and TikTok eventually became a distraction.

He would use the excuse of “homework” to be on the computer all day, she said. She put down some house rules.

“Because everything is online – homework and projects, 8 to 3 – I can’t really take the internet away,” she said. “I had to make my son wake up, from 8 to 10 do some homework, then go outside and play, then come back from 1 to 3 to finish, and no more internet after that. During the weekends, it’s only one hour.”

Limiting internet time, as beneficial as it is, doesn’t work for all families. Some, like the Pulidos and Reeds, have moved to faster broadband speeds to avoid slowdowns and frustration. The higher the speed, the more devices you can connect at one time and more types of activities you can do online.

“People have been upgrading their bandwidth,” said Schurz at Orbitel, noting that for a couple at home, 50 mbps or less is sufficient, but a family of five that streams a lot of video and has multiple devices might want to consider upgrading to something faster.

For those not ready to upgrade, both Orbitel and CenturyLink said their network engineers work daily to alleviate traffic congestion.

“I’m really proud of our team,” Schurz said. “The chief engineer works with his team every single weeknight.”

The company has added equipment to increase capacity on a system with no data caps, Schurz said.

Likewise, CenturyLink is identifying changes in internet usage to help its team monitor congestion and hot spots, and address those issues by adding capacity, rerouting traffic in real-time and revising data limits, according to company spokesman Mark Molzen.

“This increased, minute-to-minute focus and flexibility from our engineering teams has proven key to the smooth network operation we’ve seen in these unprecedented times,” he said.

Even as the ISPs labored to keep their customers satisfied, the internet has played a more important role for families during the public health crisis, the ability to bring people together, Schurz said.

“People need to feel the connection even though they are not in the same place,” he said. “It’s important to stay connected and help others feel connected.”

For Danika Pulido, the pandemic – even with its temporary internet headaches – went one better. It brought her son and grandchildren back home. And when coronavirus eventually moves on, they will not. They plan to remain in Maricopa.

“I am truly happy that they are out here,” she said, with a big smile. “It is hard because it is hitting a lot people in a very negative way, but it has brought our family closer.”