Sequoia Pathway students are protesting the termination of a popular teacher last week.

Word got out Friday that Kevin Struble had been fired, and several parents were irate, saying it was the last straw in a series of controversial decisions. Students carrying signs and chanting stood in front of the secondary school Monday morning. Some wore masks of Struble’s face.

“He does everything for this school. He stays up until 2 or 3 a.m. making his lesson plans so he’s ready to teach his classes,” senior Joliegh Boothe said. “At one point, he was signing and grading assignments for every teacher with a math class. He’s supported by every teacher and every student in this school just because of all that that he’s done. The new admin doesn’t know anything about him and all that he’s done because they’re new.”

“As an organization, if a termination takes place, it has been thoroughly vetted with appropriate documentation, along with adherence to legal precedent, even in this right-to-work state,” CEO Mark Plitzuweit told InMaricopa Friday. “Keep in mind that student and staff safety will always be of highest concern.”

Plitzuweit himself has been a target of some of the anger, with parents saying dissatisfaction has been building.

“There have been at least three teachers let go or resigned since the start of school, not to mention the two or three who didn’t return from last year,” parent Brandon Stone said. “The replacement teachers are either long-term substitutes or teachers who are now just filling in during their prep hour.”

“The application process for the school doesn’t apply any longer, so all students are let in, which has translated to multiple fights recently, more students in classes who are disrespectful and don’t want to be there, which means the students who do want to be there don’t receive the education they have for the past few years,” Stone said.

The students were hearing the teacher had been fired for low test scores, insubordination and unprofessional behavior. Those protesting were highly skeptical.

“In reality, when we did AzMerit, his pre-calc class got the highest scores,” senior Mickenzee Bell said.

Plitzuweit said, due to privacy, only half the story was being told. “It’s always the second half of the story that can’t be shared that could bring clarity to the actions,” he said.

Angry parents threatened to pull their children from Pathway, and Plitzuweit said they have every right to do that. But he warned against organized protests on private property, “as it would be considered a disruption of an academic learning environment.” When Monday’s protest continued into classtime, police were asked to drop in and monitor the situation. 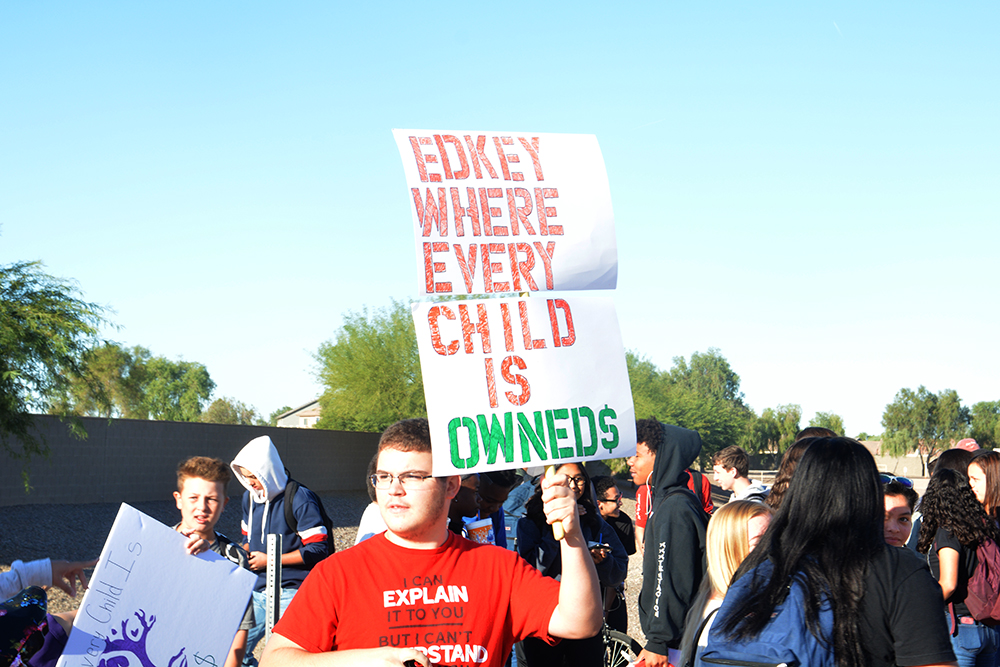 Plitzuweit said the school is facing a teacher shortage similar to the rest of the state, and the hardest slots to fill are math, science and special education. “Out of our 18 schools, this location is one that we have had a greater need for long term substitutes.”

He said he is unaware of an increase of fighting or other disciplinary issues parents have claimed and said he would talk to the administration about it. He said he has heard from several families expressing appreciation for the new leadership.

“All that being said, I am very supportive of the campus-level decisions that have been made in several areas and I look forward to the continued accountability measures that are in place to increase student outcomes, in a safe and secure environment,” Plitzuweit said.

Pathway Secondary Principal Ja-Queese Dightmon did not respond to a request for comment.

The protest was an echo of a 2015 student pushback against the termination of two administrators at the campus. The two were eventually re-hired, but have since left EdKey.