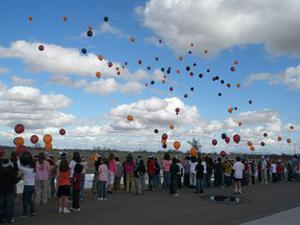 The students at Pima Butte Elementary celebrated the 100th day of school Monday with an outside assembly marked by releasing 100 balloons into the sky.

All grades lined up on the pavement outside and donned their specially made 100-theme hats for the assembly. Some students made caterpillar hats which counted to 100 by tens on the body. Others decorated sunglasses that read 100.

After Assistant Principal Danielle Record started off the assembly with a recap of the school’s focus on fairness this month, 100 students lined up on the edge of the blacktop with their balloons. They were chosen based on the fairness they displayed in their classroom over the last month, school officials said.

The students then counted by fives to 100 as the balloons were released into the sky. Each balloon contained a special message attached to the string. The staff at Pima Butte plan to track where the balloons land by the responses they might get through email or U.S. Mail.

Once all of the balloons were out of site, Pima Butte “rocked the house” with a special school chant and then danced to the “cha-cha slide.” Principal Matt Montoya and Record tossed shirts and candy to the students while they danced.