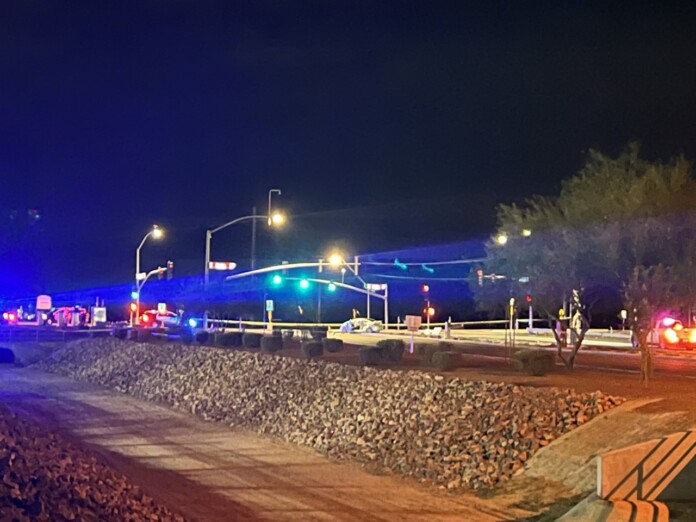 According to a probable cause statement released by the Maricopa Police Department Wednesday, a man involved in a shooting Sunday was ready to kill to ensure he did not go back to prison.

The statement gave more details on Sunday’s officer-involved shooting, and what led up to it.

At around 6 p.m. Sunday, Maricopa Police received a call from a male victim stating he had been stabbed with a kitchen knife and had been burned with boiling water by his roommate.

The victim said he tried to leave the residence after Zapata poured boiling water on him but was stopped at the front door and stabbed in the chest by Zapata.

The victim alleged Zapata told him he was not going back to prison and he may have to murder him, adding Zapata forced the victim into the bathroom and had him shower.

The victim advised police they resided at a home on West Sanders Way, in Homestead, where the incident occurred.

The victim sustained burn injuries from boiling water on his head, shoulders, chest and back. The victim also had a stab wound on his chest, just below his left nipple, which punctured his lung, and deep laceration wounds on the fingers of his left hand.

The victim escaped the residence wearing only a towel and ran to a neighbor’s house.

The victim told officers Zapata had been excessively drinking alcohol for a few days and was mean when he was drunk.

When officers arrived at the residence, Zapata fled the scene in a Toyota Scion, driving erratically, reaching speeds between 80 and 90 miles per hour as he tried to evade officers before colliding with a Ford SUV at the intersection of Maricopa-Casa Grande Highway and Porter Road, after failing to stop at a red light.

An eyewitness told InMaricopa he and his son were in their vehicle sitting at the traffic light waiting for a train to pass when he heard sirens and saw a car “coming up pretty fast” south on Porter Road. “I saw him coming and he just didn’t stop … The cops were right behind him.”

PCSO is investigating the MPD officer-involved shooting that followed the collision and Pinal County Vehicular Crimes Unit is handling the crash scene investigation. MPD is in charge of the investigation of the original aggravated assault complaint.

Inside the residence on West Sanders Way, officers found evidence they deemed consistent with the victim’s story, including what they believed to be blood near the home’s front door, in splatters on the wall and flooring, in the bathroom and shower, on the garage door handle, on the exterior garage door and on the garage floor.

The current condition of the victim was not released.