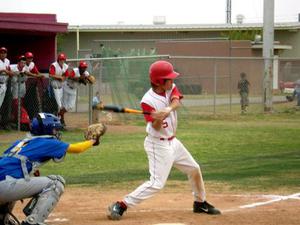 After dropping to second place in the 2A West region Thursday, the Maricopa High Baseball team battled back Friday to beat Gila Bend 7-8 in extra innings.

The Rams lost to Yuma Catholic Thursday, which gave Yuma the first place position. Maricopa gave up eight unearned runs in the game.

“It was a tough loss,” Coach Steve Pappas said. “But we didn’t have time to get down about it because we knew we had to come out here today and play a solid game.”

Until Thursday, Gila Bend had provided the only loss for Maricopa in league play.

Both teams started the game with solid defense, no runs scored for either side in the first two innings. Then in the third, Gila Bend took the lead scoring twice. Maricopa was able to score one run in the bottom half of the inning but still trailed the Gila Monsters 2-1.

In the fourth inning, the Rams rallied to score three runs. Matt Clark started the rally with a single, followed by consecutive doubles from brothers Joe and Kie Zabawa.

Gila Bend tied the game at four in the top of the sixth inning when they scored two runs. But Maricopa quickly took the lead back in the bottom half of the inning, scoring three more runs to bring the score to 4-7.

In the top of the seventh, Maricopa allowed Gila Bend to score three runs and tie the game up for a second time. The Rams were unable to finish the game in the bottom half of the inning, going three-up and three-down.

Picther Lionel Iglesias was able to keep Gila Bend from scoring in the top of the eighth, giving the Rams another chance to get the win.

Kie Zabawa opened the inning with his second double of the game. Then Josh Figueroa was safe at first on an error. Figueroa attempted to take second when the third baseman bobbled the ball in an attempt to catch Zabawa at third. The third baseman threw the ball to second giving Zabawa the chance to score and win the game for the Rams.

The Rams have two league games left. In order to regain first place in the region, Maricopa will have to win both games and Yuma Catholic will have to lose at least one.

Coach Steve Pappas said although it is essentially out of their hands, he is confident his team will still play hard the rest of the season. Pappas said it is important to finish strong in order to take that momentum into the playoffs.

“At this point, they have to do it for their own pride,” Pappas said.