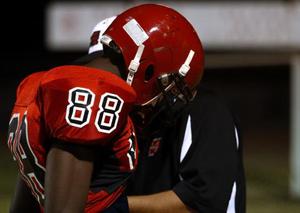 After a scoreless first quarter, Fountain Hills (2-4) struck first early in the second quarter when Steve Langston converted on a 37-yard field goal.

On the their next offense procession, Falcons running back Michael Craig took the handoff and went straight up the middle from 16 yards out for a touchdown. The extra point attempt by Langston was successful, giving the Falcons of Fountain Hills a 10-0 lead late in the second quarter.

The Rams defense forced and recovered a fumble late in the second quarter, giving the Rams offense an opportunity to put points on the board. Rams quarterback Will Clemans picked up 19 yards on an option keeper, fired a pass to tight end Devon Snell for a 17-yard pickup and hit Sebastian Ugarte for a 14-yard gain, but the half ended with the Rams still scoreless.

The Falcons scored early in the third quarter when quarterback Jason Fairfield found Jim Hubick from 16 yards out for a touchdown and 17-0 lead.

The Rams offense looked to bounce back, but a fumble by Clemans was recovered by the Falcons deep in Maricopa territory. And with 7:26 remaining in the third quarter, Fountain Hills running back Ethan Hodge scored giving the Falcons a 24-0 advantage.

The struggling Rams offense took to the air, as Clemans completed back-to-back passes to wide out Cody Seymore for gains of 15 and 12 yards. Clemans then picked up 17 yards on a keeper putting the Rams in Falcon territory. The Rams went back to Fierros on the ground, but had no success, so Clemans fired a pass to Seymore for a 43-yard gain. On the next play, Clemans ran a quarterback keeper up the middle for the team’s first score. The two point conversion attempt failed leaving the Rams with a 24-6 deficit with 4:12 remaining the third quarter.

The Rams defense came up with big when safety Kendall Morris made a tackle forcing a fumble that was picked up by linebacker Fierros who trotted into the end zone from 25 yards out, cutting the lead to 24-12 after a failed extra point attempt.

With 4:56 remaining in the game, Fountain Hills’ Fairfield found Hodge from 5 yards out for another Falcons touchdown and a commanding 31-12 lead.

With the timing winding down Clemans went back to the air and found Seymore in the end zone from 30 yards out narrowing the final margin to 31-19.