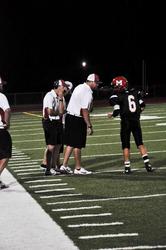 For the second consecutive Friday at Maricopa High School football stadium, the host Rams will be facing an opposing quarterback with game-changing ability.

“They run the football really well,” Maricopa Coach Cory Nenaber said about the Coronado Dons, who are entering the match-up with a 2-3 overall record and a 1-1 mark in the Class 4A-II East Sky Region. “Their quarterback is a stud. He is the guy. He’s big. He’s fast. They try to get him the ball as much as possible.”

Buya has rushed for 630 yards and 10 touchdowns on 100 carries this season. He also has completed 22 of 48 passes for 219 yards with no touchdowns and two interceptions.

“He’s basically more of a running back that plays quarterback,” Nenaber said. “He throws it enough, but he’s a really good runner.”

The Dons’ second-leading rusher is senior running back Blaze Dikeman, who has gained 414 yards on 76 carries.

Coronado is coming off a 56-6 loss last Friday to Phoenix Arcadia, but the Dons posted a 34-28 victory the previous week over then-undefeated Chandler Seton Catholic. Coronado rushed for 488 yards in the win over Seton Catholic, with Buya leading the way with 199 yards and Dikeman adding 183.

“They’re a good football team,” Nenaber said. “Everybody in our region is good. It is arguably the toughest 4A-II region in the state.”

Maricopa (2-2, 0-1) is seeking its first victory over an East Sky Region opponent since moving up last season from the Class 3A level to 4A-II.

“Offensively, it will be nice because this will be the first time this year that we’re not totally over-matched size-wise, where we’re not giving up 30 pounds per man,” said Nenaber, who is in his first season at Maricopa after serving as an assistant at Tempe Corona del Sol. “So it will be good for us to see what we can do against a little bit smaller opponent, but at the same time a very quality opponent. We’ve got to take care of the football and eliminate the penalties. Penalties killed us last week.”

The Rams were flagged for six penalties for 37 yards last week, with several coming in key situations when Maricopa was moving the ball on offense. Despite the penalties, Nenaber was encouraged by the improvement that the offense showed against Higley in the second half, when the Rams scored two touchdowns to close a 28-0 third-quarter deficit to 28-13 with 7:30 remaining in the fourth.

“I think we gained some confidence offensively in the second half that we didn’t have before,” Nenaber said.

Friday’s game-night atmosphere figures to be festive at the MHS stadium. The Maricopa Rams Football Booster Club will host a pre-game tailgate party in the parking lot. At halftime, the Homecoming queen will be crowned.

“I think it is a good, positive thing for the community and for the school,” Nenaber said about the Homecoming celebration. “I like Spirit Week. I like Homecoming Week. We know we have a football game to play, and Homecoming wouldn’t happen if we didn’t have a Homecoming football game. We’re pretty focused on the game.”

Nenaber said the Rams are approaching the match-up against Coronado with confidence.

“I think it could be a really good game,” the Maricopa coach said. “I think we’re pretty evenly matched. I’m excited for it. I’m really excited for this Friday.”