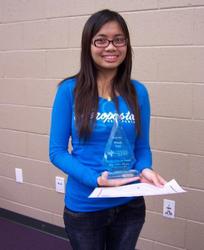 Wednesday’s MUSD governing board meeting was delayed a few minutes in order to find enough chairs for the capacity crowd of parents and community members. Many of them were there for the recognitions and celebrations portion of the meeting.

Maricopa High School principal June Celaya introduced several students who have formed STATE (Students Taking Action Toward Education). The group’s goal is to raise money for everyday classroom supplies and to educate adults about educational goals and needs. “They are taking a very proactive role in their education,” said Celaya.

Rachele Reese, assistant principal at Saddleback Elementary, announced that the school raised $1,859 dollars in their Pennies for Patients drive for children with leukemia.

District volunteer coordinator Margaret Jackson recognized all the nominees for this year’s volunteer awards. Currently the district has 836 registered volunteers, including governing board members. “There are all kinds of ways to volunteer,” said Jackson, who presented the following awards:

The first grade Butterfield Bobcat singers were the finale, singing “Lights, Camera, Action” and the “Bobcat Song” under the direction of music instructor Janell Sarkozy, who wrote the “Bobcat Song.” “They are great singers,” said Sarkozy. “Every day they come in ready to learn.  I’m really proud of our students.”

Board members approved the district benefit plan for the 2011-2012 school year, teacher contract and notice of indefinite term appointment language, but tabled related service provider, counselor and administrator contract language until the next board meeting. The MHS senior Grad Bash trip to Golfland was also tabled. Governing board members voted unanimously to cancel the May 26 board meeting, which was scheduled for graduation night.

During the study session Director of Business Services Aron Rausch gave the monthly financial report. He also reviewed the budget calendar for the next few months, indicating that although the district’s budget revision is due May 13, the legislature may move it to July 15 after the vote on Proposition 100; its passage would mean $2.6 million for MUSD.

The ad hoc budget committee, which will meet again on May 3, will bring the governing board its recommendations on future cuts, amounting to $7.6 million, on June 9. Rausch noted that the Keep Our Educators Working Act of 2010 is proceeding through congressional channels. It could mean $2 million in stimulus monies each year for three years, if passed.

In regard to the potential date changes from the legislature, Superintendent Jeff Kleck told the board, “We need to keep June and July fluid and flexible with budget meetings and hearings.”

Jackson came before the board to enlist their support, which she received, for the Raise a Reader program. “As a community we need to join together and create an atmosphere where reading is cool,” Jackson said. She will be out in the community looking for funding help for this program.

“The focus is really on drawing the community in and allowing them to understand how important they are in educating a child. The goal is to show that reading is not something that’s just done in school. We need to find some strategic ways to get folks involved, and then our hope is it grows as time moves on,” Kleck said.

Celaya and MHS assistant principal Rick Neilson were present to answer the board’s questions on senior retention and promotion. Of the 303 students in this year’s senior class, 21 will not graduate. In addition, 74 regular education students are presently at risk of failing. Of that number, 21 are from other states. “The problem we have is that not all our standards align with other states’ standards,” said Neilson. He also explained that no gender or ethnicity stands out among the 74 at risk students and fluctuations in student status will occur depending on how they are doing in their semester classes.

“Two problem areas are math and science,” Neilson said. “This is not unique to Maricopa; this is a nationwide issue.”

Board president Geoff Goddard said trying to get kids reading earlier, including the board’s decision to maintain all-day kindergarten, would help early learning deficiencies. “All these numbers should get better,” Goddard said, citing the need to have accurate data regarding deficiencies. “We need to put in place a robust system to bring them up to speed before they go to the next level.”

“We need to be making decisions based on best practices and research,” Celaya said. “We can’t control kids coming in from other states, but we need to have some kind of program in place that’s proven to be effective.”

The governing board will revisit the promotion and retention issue at their next meeting on May 12.