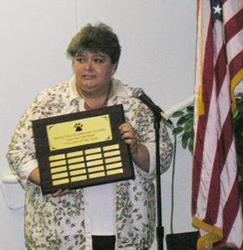 A baseball signed by Arizona Diamondback Chad Tracy, a Toys “R” Us shopping spree, and four tickets to a Diamondbacks game went home with Santa Cruz Elementary fifth-grader De’Shaun Felder following a presentation Wednesday at the Governing Board of the Maricopa School District meeting.

“I’m really happy and I’m going to spend my shopping spree on kid’s stuff, like stink bombs,” De’Shaun said, adding that he promised not to use them at the school.

The youngster received these gifts as part of a new program to recognize a Coyote Student of the Year.

“This is a wonderful way for our school to promote school spirit and good behavior,” said Santa Cruz Elementary Vice Principal Rachelle Reese.

The way the program works is that whenever a teacher observes a student doing a good deed, they reward the student with a paw print. At the end of the year teachers and staff look at he students who have received the most paw prints throughout the year and vote on who they think deserves the award.

The vote to select Felder as its first recipient was unanimous.

“De’Shaun is very polite young man. He always holds the door open if he sees someone is coming in behind him and he is an excellent student,” said Santa Cruz Elementary Principal Lynnette Michalski.

Besides the take-home prizes, the award recipient each year will have his or her name memorialized on a plaque.

“The plaque can hold 20 names, and hopefully once it is full we will start a new one,” Reese said.

Reese joked during the ceremony saying that one day De’Shaun’s own children could see their dad’s name on the plaque.

It was really a surprise to find out that he had won,” said De’Shaun’s father Sherman Dedrick. “We are really proud of him.”

In addition to the Student of the Year program, Santa Cruz Elementary also introduced a program to recognize one teacher for excellence.

Music Teacher Mary Goldner was selected as the first to earn the honor.

“Mary is an awesome teacher. She created a beautiful coyote rap song that the students love to sing during events,” Reese said.

Students, parents and staff submit nominations and at the end of the year to select their favorite teacher. Then everyone votes on the nominees, with the victory going to the one who garners the most votes.

“This is a very cool thing,” Goldner said.