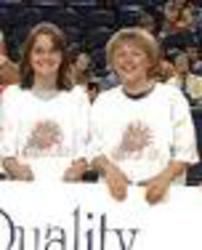 The event was made possible through a partnership program between Arizona Public Service and the Phoenix Suns. Twenty-three Santa Rosa Academic League pupils attended the basketball game and two pupils were part of a group picture that featured Sun’s forward Boris Diaw.

“Congratulations to each of our Academic League participants for their hard work,” said Tom Beckett, a spokesman for the district.

Click on the < > underneath the photo to see more images.