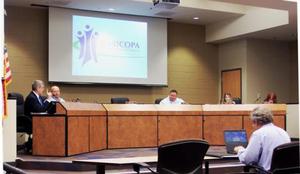 The Maricopa Unified School District governing board met last evening to hear updates on the progress of both Maricopa Wells Middle School and Maricopa Elementary School.

Board member Lori Glenn, who resigned Wednesday from her position, was not in attendance (see related story).

Maricopa Wells Middle School principal Rick Abel outlined the demographics of the school for the governing board. Certified staff members number 43; 25 are regular classroom teachers and four are special education teachers. Sixty percent of the teachers are new hires, including six new math teachers, and 38 percent have master’s degrees. Teachers have an average of 7.3 years of teaching experience.

Enrollment at the school is down by about 75 students this year. The current enrollment is 645: 204 sixth graders, 212 seventh graders and 229 eighth graders. The average class size is 26. Student attendance is up, and discipline referrals have decreased from 2.41 per day last year to .91 per day this year. A “Whatever it Takes” program is being used to identify and assist at-risk students.

In terms of parental involvement, the number of parents attending conferences doubled this year, and the PTO is being reinstated.

New turf, shade structures and drinking fountains have given the site a new look and feel. There are positive rewards for students who “take care of our place,” and graffiti and vandalism have decreased. “We went six days in a row without vandalism recently,” said Abel.

According to AZ Learns, MWMS is performing plus, but the average yearly progress (AYP) was not met for No Child Left Behind; the site’s Title 1 status is a restructuring and planning year.

“Teachers are telling me kids are more engaged and excited about their work,” Abel said. “Teachers are feeling more productive, and I think they’re excited to see the kids are stepping up.”

Board president Geoff Goddard complimented Abel on his leadership and planning. Abel replied, crediting district and site staff for their work. “There have been great teachers at Maricopa Wells for years, good kids and good families.”

Rachele Reese updated board members about changes at Maricopa Elementary School, thanking her teachers and PTO members who have been working on remodeling projects at the school. The cafeteria is now decorated in school colors and features a mural by an Oregon artist depicting the six traits of character and the animals used to represent them. There is also a new school song.

Reese explained that one major focus is on student engagement with an 85 percent goal for this year. Small group intervention is being used “to get students where they need to be,” according to Reese. Other focus areas are reading, parent feedback, tutoring and “promoting behavior in a positive, proactive way” using Character Counts tickets.

Discipline referrals have decreased, and, for those students who need behavioral changes, there is Saturday character school, featuring a movie and discussion on the trait the student is having difficulty with.

“I think what you’ve done in a short amount of time is impressive,” Goddard told Reese.

Board member Tim White added that, although he wasn’t initially sure about Reese assuming the MES principal’s slot, he had changed his mind. “I hope you will continue to inspire and get excitement in these kids. That’s what it will take to turn MES around,” White said.

The MHS marching band came home victorious from an Oct. 9 competition, taking outstanding in the following categories:  percussion, auxiliary (color guard), visual performance and effect. According to Superintendent Jeff Kleck, “The band is now on the road to state competition at Aqua Fria High School on Oct. 23.”

Board member Carrie Vargas has been selected by the Arizona School Board Association as a state representative to a national education advocacy conference in Washington, D.C., in February. “I consider it an honor and privilege to get selected,” Vargas said.