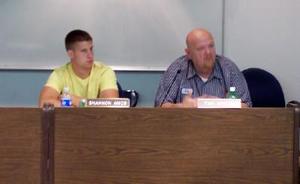 Wednesday’s school board meeting was agendized to be largely informational with reports on construction, after school care on early release days and a recently formed task force in response to the incident at the middle school.

Superintendent Dr. John Flores announced that for the first time the Ak-Chin Community’s preschool children were being tested to establish a baseline assessment to help them with an “operational learning mode.”

When approval was sought for the minutes of the previous meeting and the agenda items, board member Tim White moved to table the minutes and the selection of a date for the board to evaluate the superintendent in executive session.

Although the tape recorder was working at the last board meeting, “something was wrong with the feed,” according to Technology Director Gina Pinch. Minutes of the general meeting were “based off notes from Superintendent Flores due to meeting tapes being blank.”

White, who had obtained a copy of a press recording of that meeting, wanted the minutes tabled until the tapes and the existing minutes could be compared. He questioned whether the minutes were accurate although he had turned the tapes over to Flores. “We need the originals so the minutes are accurate,” said White.

“I am discouraged that you (Chaston) or him (Flores) would try to deter that from happening,” replied White. The evaluation was tabled.

Flores announced that the Before and After School Programs will be continuing as well as a two-hour, fee program for children on Wednesdays during early release. Director Julie Jimenez questioned who would be providing those services, her staff, the city’s new partner, the East Valley Boys and Girls Club, or the YMCA, mentioned earlier by Flores.

“If the YMCA or the Boys Club are taking over, it certainly would be considerate to let me know,” noted Jimenez, who was assured that no changes were being made in the Before and After School Program.

Personnel matters were approved, with the exception of Heidi Fawcett’s change from Director of Special Services to Director of Human Resources. The lateral move was tabled when White suggested the Fawcett was forced to apply and might not be the best qualified.

The group, formed in direct response to recent middle school issues, has as its goals: communication, collaboration, strategies, education and resources for parents and the establishment of a silent witness program.

White, expressing concern for his own daughter’s safety, questioned why district employees with gang training were not included in the meeting. “We need to include the five individuals trained for gang activity,” he noted.

Ogaard responded that this was “just an initial meeting where we said there’s a problem, let’s fix it.” The task force meeting was put together in under a week and didn’t include either the Ak-Chin or Gila River police chiefs. “Part of the problem was off campus and included the sheriff’s department,” added Ogaard.

“There will absolutely be more meetings and more people brought to the table,” Ogaard said.

White continued to berate Flores for not including the five administrators and directors who had taken gang activity training and for having students return to campus after their suspensions but before their board hearings. Flores “respectfully disagreed” about the inclusion of staff, saying that the meeting was a rapid response to a problem and that the number of possible expulsions was the largest in the district’s history.

White’s continuous remarks brought a response from Chaston, “Mr. White, I think we all understand that you’re trying to get our superintendent fired.”

White retorted, “You took the floor away from me because you think you’re the president.”

Fawcett was able to explain the three-pronged approach, including students, staff and parents, which the district will be taking. Parent and community nights will be held at the schools, and in May student assemblies will be held. Safety teams, consisting of parents, community members and staff will be at each school site.

During the Call to the Public, Maricopa Wells Site Council president and parent of two middle schoolers Theresa Farley thanked “staff and teachers for keeping our kids safe.” She urged to board to get additional hearing officers since Jimenez is currently the only one in the district.

Local resident Suzy Breunig, whose grandson was involved in the recent middle school incident, commended Principal Stephanie Sharp and the officers for their handling of the situation. She asked why Flores was not at the school during the incident.

The board did approve seven legislative priorities, including teacher salary equity, district funding and anti-gang education and resources. Clerk Tracy Davis was particularly adamant about the funding for anti-gang education. The priorities will be forwarded to the Arizona School Board Association (ASBA).