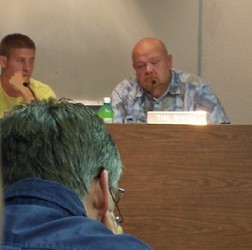 Legacy Traditional School is a Pre-K through sixth grade, publicly funded charter school whose permanent facility is being constructed near Honeycutt and Gunsmoke Roads. The school plans to open on August 13 this year.

Estes explained that the opening of the school’s permanent building would be delayed four to six weeks due to a new roadway being mandated by the city, which created a need for re-engineering of the site.

“This puts us beyond where we’d like to be at the start of school,” said Estes. The school will need to bring in portable classrooms until construction is completed. “We’d rather help the local school district instead of paying a big company to bring in portables,” he explained.

Legacy’s proposal was to lease space at the present Santa Cruz Elementary School site for $55,000 per month for three months. If portables were brought to that site, they would be left there, and their lease turned over to the district.

Maricopa High School Principal Burnie Hibbard offered the board “the best information I can give you in terms of availability on campuses.” He reminded the group that there would be ongoing construction at the high school campus this summer when a new sewer line will be installed. At the beginning of the year district Pre-K classes, overflow from Maricopa Elementary and high school classes may all be using the Santa Cruz site.

In regard to portables, Hibbard said, “There will be a huge amount of construction on this campus. We’ll have trouble finding field space as it us.”

Board member Tracy Davis added her concerns about both the district’s space needs and the septic capacity on the campuses. She also noted that portables count against the district in terms of square footage tallied by the state’s School Facilities Board.

“I don’t think it (the lease agreement) is the right message to send,” said Board member Shannon Amos.

Board President Jim Chaston added, “The major problem is we don’t have space.” His concern was with the public questioning why the district was supporting a charter school rather than focusing on its own schools.

“It’s a lot of money,” noted Board member Tim White, “but, as a businessman, there’s no way I would bring in another towing company and give them space in my yard. It’s not good business sense to support the competition.” White asked Mark Busch, Administrator of Business Services, what it costs the district per student enrolled in the charter school — $4,000 per student was Busch’s estimate.

He also reminded the board that the same government supports the charter school and the district schools.

The board voted unanimously to reject Legacy’s leased space proposal.