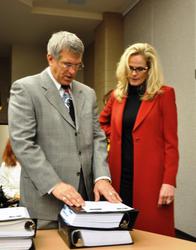 A major overhaul of the Maricopa Unified School District’s Governing Board was completed Tuesday afternoon as three new members of the board were sworn in.

“I am excited to get started,” said Patti Coutre. “It has been a long process securing this seat.”

Coutre took the oath of office along with Scott Bartle and Torri Anderson. All three were sworn into their new seats by departing board member Tracy Davis at the brief ceremony.

“Board members get to choose who swears them in and the district could not think of a better person than Tracy,” said Superintendent Jeff Kleck.

The new members replaced Davis, who chose not to run for re-election, and two other departing members: Tim White, who lost a re-election bid and Lori Glenn, who vacated her board seat in November.

The trio join board members Geoff Goddard and Carrie Vargas, both of whom have served for two years.

“These three community members now get to be part of our fine institution,” said Kleck.

Anderson, Bartle and Coutre will participate in their first school board meeting Jan. 5.

“It feels great to finally have the ability to ask questions during the board meetings,” Coutre said.