Although the MUSD Governing Board is drafting 14 expenditures in all, the conversation around increasing employee pay is compelling board members to discuss shifting even more funds from afterschool transportation to supplying more income for its workers.

The board sharpened its focus Tuesday night during its budget work session inside the district administration building, but a more in depth discussion takes place tonight at 6:30 p.m.

Here is a snapshot preview of tonight’s budget discussion: 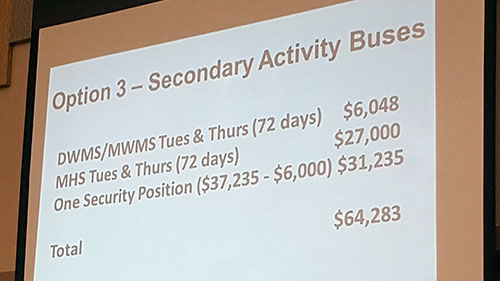 ·         Activity Buses: Out of three draft funding options discussed Tuesday night, the board leaned toward the least expensive, which would keep activity buses running two days a week at MUSD’s middle schools and high school. At a previous meeting, the board pitched the idea of running the bus five days a week at MHS.

o   Cost: $64,283. The proposed figure is down nearly $50,000 since the board’s last meeting. The cost would include the salary of a security guard who will monitor the high school students using the after school bus. 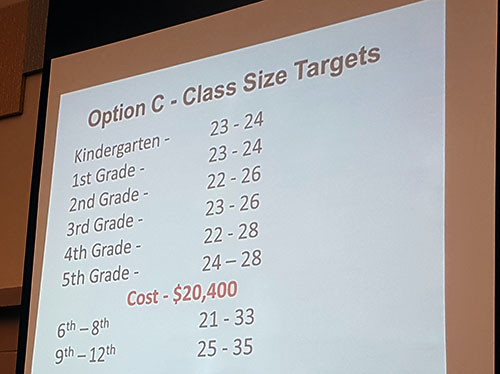 ·         Classroom Target Size: Lowering class sizes could be expensive at MUSD if it goes with one of the three options Superintendent Steve Chestnut proposed Tuesday. The costliest of the trio, “Option C” would also alleviate crowded classrooms the most.

·         Employee Pay: The district is discussing a 3 percent salary increase for all employees. Teachers will receive an additional 1 percent increase from the state. Board members agreed that giving staff a significant wage increase would raise district morale and attract quality teachers in the future.

o   Cost: $775,000. This figure is a half-percent increase from the board’s previous proposal of a 2.5 percent salary raise for district employees.

The board is also expected to discuss, Wednesday, the creation of a “sick time bank” which would allow employees to donate a portion of their unused sick time to those who have used their 11 day allowance and are in need of more. If approved, the proposal would cost the district $28,000.