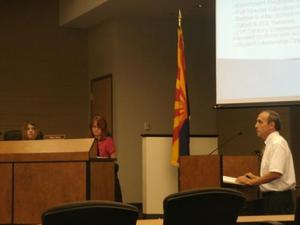 Principal June Celaya provided information on the Maricopa High School senior class. She said that, as of early August, a total of 59 new seniors had enrolled as part of the 355-member Class of 2011.

“In looking at some numbers, I have to say that we have a very transient school at this point,” Celaya said regarding families moving in and out of the district.

Celaya said that 155 seniors are currently failing one or more classes. She added that 104 of the seniors are credit-deficient, meaning that they have earned 15 or fewer credits.

“Of the 59 new seniors, 19 of those have come to us with credit deficiencies,” Celaya said. “We’re getting some very difficult challenges ahead of us in terms of kids showing up that are credit-deficient. But I think the upside of that is we’re doing a good job of remediating them.”

Celaya said that each senior met with a guidance counselor at the beginning of the school year to determine an individual action plan based on the student’s transcript. Counselors have since met again with all seniors who were failing one or more classes.

“They reviewed the action plan and sent a letter home saying that if your child doesn’t remediate this grade, they will be in jeopardy of failing that class,” Celaya said. “The student is recommended for tutoring at that point, and contact is made with the teachers.”

Transportation Director Fred Laguna updated the school board on the district’s recent consolidation of bus routes.

Laguna said the district provided four days notice to families prior to instituting the changes in bus routes.

“When we were planning on doing the change, we sent out letters to the parents,” Laguna said. “We gave school sites the information that was needed to do those. We sent out letters with the students for home two days in a row before the change went through.”

A glitch in the Versatrans software caused a bus route in the Santa Rosa area to be skipped on the first day of the changes.

“We lost an area with Versatrans,” Laguna said. “As soon as we learned there was not a bus for students in that area, we dispatched a bus.”

Governing Board President Geoff Goddard said that parents from the area called him wanting to know where their children were. Goddard said the parents contacted him because their calls to the school district went to voicemail.

“If we have buses out there, we need somebody out there to answer the phone,” Goddard said. “Voicemail is not going to cut it.”

Goddard said he believes the district needed to provide more than four days notice for the adjustments in bus routes.

Dr. John Flores, principal at Santa Cruz Elementary, provided the governing board with an update on the school, located at 19845 N. Costa del Sol.

Flores also is proud of the school’s 97.6-percent attendance rate from last year.