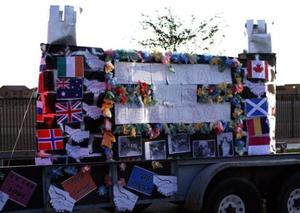 It was a bit windy, but nothing rained on Maricopa High School’s Homecoming Parade Wednesday evening.

Over 20 floats and walking groups, representing various classes and clubs at the school, plus the Santa Rosa Elementary Student Council participated in the annual event.

The parade route began in the parking lot of Maricopa Wells Middle School, wound down Honeycutt to Taft Ave. and into the football stadium area.

Following the parade, the spirit bonfire was lit at 7 p.m. The cheer squad performed and football players, students, families and teachers all got into the spirit of Homecoming in preparation for the game vs. Florence Friday night.

The Homecoming theme, Celebrate Our Heritage, was to be incorporated into the float designs, as was the class or club’s identity. Creativity, originality and neatness were some of the other guidelines established by the high school student council, who organized the parade.

Judges, all members of the local media outlets, picked the top three floats, which were awarded framed certificates at the bonfire.

The 2007 winning Homecoming floats were:

Friday night’s game is scheduled for a 7 p.m. kick off. Homecoming royalty will be crowned at half time of the game.