A group of football players from Sequoia Pathway Academy have been signed to various college teams, were recognized by their classmates during a pep rally on Wednesday.

“This is a big season for us” says Coach Donnie Margerum, “We are graduating 21 kids, 11 of them will be getting offers to play college, and I think it’s a big deal.”

The students signed are listed here:

Amari Turner was signed to Benedictine University in Lisle, Illinois.

Some of the graduates added on why they love football, both Favier Gutierrez and Jeremiah Garcia love the adrenaline of pushing themselves, “I love the adrenaline, when I have to push myself to my limits” Favier said. “I’ve had a ball in my hand since I was little. . . I really like the rush of adrenaline and have loved it since” Jeremiah added.

Some of these boys have been playing football since they were very young, Jyrei Gamble explained how he became interested, “When I was nine, my dad signed me up and I thought it would be fun, I have loved the game ever since.”

Coach Donnie talked about how well the football players managed their time and efforts, “These boys have done a good job of handling stuff both in the classroom and out on the field” he said.

“I am proud of them” Coach Donnie added. 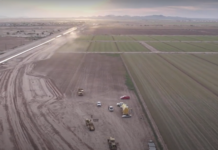