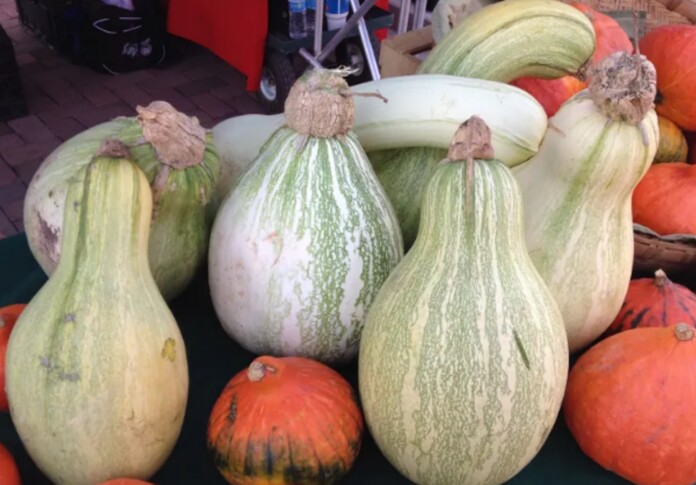 It’s that time of year again, when we give thanks with pumpkin and squash on the holiday table.

Cucurbita, Latin for gourd, is among the most economical and widespread crops throughout the world and iconic at American holiday feasts. This large family of plants includes squash (winter and summer), pumpkins, melon, cucumbers and gourds.

Squash, pumpkins and most gourds originated in the Americas.

The word “squash” is a Native American word, askutasquash, from the Narragansett (Algonquian) word meaning “eaten raw or uncooked.” Today most squash is eaten cooked.

The first squash arrived in Europe in 1591, and a cucurbita was undoubtedly on the Thanksgiving table at that historic feast between the pilgrims and the Wampanoag tribe in 1621 in Plymouth, Mass.

Long before the pilgrims set foot on the shores of what would become the United States, cucurbits had been cultivated and grown here for thousands of years.

The earliest evidence of domesticated squash was found in a cave in Oaxaca, Mexico. Evidence of the cultivation of cucurbits dates to more than 8,000 years ago. A variety of pumpkin is believed to have originated in northeastern Mexico and the southern United States about 7,000 years ago.

Over the next few thousands of years, cucurbits would become the most widespread crop of the Americas, ranging from southern Canada to South America.

Cucurbits were undoubtedly here in the Southwest and central Arizona within at least a few thousand years of cultivation in Mexico. Unfortunately, squash is an elusive plant to find in the archeological record. Squash is soft and does not preserve well unless deposited in a cave.

What is more often found is the presence of cucurbita pollen in dirt samples from cooking and food-processing areas. Pollen is resilient. We also know from Spanish accounts the Native Americans they encountered in southern Arizona grew an abundance of squash, pumpkins and gourds as well as other crops.

Cucurbits are still important crops to Native American groups in the Southwest today. The O’odham peoples near Maricopa (Ak-Chin Indian Community and Gila River Indian Community among them), still traditionally grow squash, pumpkins and gourds. A few favored Tohono O’odham squash varieties include Ha:l and Magdalena Big Cheesehead, the latter a giant pumpkin-like squash with bright-orange interior flesh. The Big Cheesehead is a favorite to slice into strips. Dried, it preserves for months.

Heirloom cucurbit varieties are hardy, preserve well and are adapted to desert conditions. They have been grown in central Arizona and the Americas for a long time — so long they even have their own native bee, Squash Bees (Peponapis and Xenoglossa). These bees specialize in the pollen and nectar of wild gourds and cultivated pumpkins. Their range is nearly identical to the range of wild and cultivated cucurbits. These bees are solitary and do not have a hive to return to at night. Look in your squash blossom early some morning and you might find a Squash Bee taking a snooze.

If you are interested in growing Native American squash, you can find seeds available at NativeSeeds.org.

Alycia Hayes is a University of Arizona Master Gardener volunteer.

This column was first published in the December edition of InMaricopa magazine.