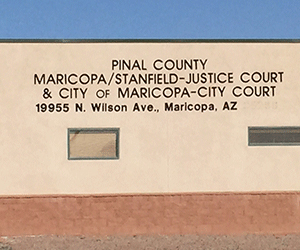 Judge Pro Tem Jack Pritt of the Western Pinal Justice Court found Wayne Miller guilty of 14 counts of animal cruelty following a bench trial on Feb. 15. Miller was sentenced on April 10 to 60 days jail and three years’ probation and is not to possess any animals during that time period.
During the trial, evidence revealed Miller had 14 dogs locked up at his rural Maricopa property. Upon executing a search warrant, Animal Control Officers found layers of animal feces, trash, torn furniture, car batteries, and other items littering the property. Additionally, officers noted there was no drinkable water and food was intermixed with feces and trash lining the floor. The dogs were aggressive to one another and were clawing their way at the interior walls that led to the outside. A carcass of one dead dog was food for other dogs on the property.
Deputy County Attorney Chad Heywood prosecuted the case.
“The conditions these animals were kept in was deplorable, and my goal in this prosecution was to make sure no other animals had to suffer the same fate at the hands of this defendant,” Heywood said.
This was the second animal cruelty conviction for Miller. His first conviction stemmed from an incident that occurred in October 2017. He was convicted on his first offense in May 2018.
If you suspect animal cruelty, please contact Pinal County Animal Control at 520-509-3555. For calls after hours, please contact the Pinal County Sheriff’s Office.

Maricopa Police are seeking information about an apparent incident of animal cruelty involving a cat wounded by a small projectile over the weekend in the Desert Passage subdivision.

The cat, struck by what appears to be a small crossbow bolt in the upper portion of its front right leg, was discovered by its owner, Donald Caldwell, after returning home from work on Sunday.

Caldwell immediately called police to report the incident. However, given the length of time Caldwell was away from home, and without any witnesses, police believe finding a suspect or suggesting a motive is difficult.

MPD spokesperson Ricardo Alvarado said the incident was likely a random act of animal cruelty and not the actions of a disgruntled neighbor or fellow resident.

After information about the incident was shared on social media, residents reported several other cases involving the small projectiles wounding other animals or damaging property around the same time.

That day, in the Alterra subdivision, a resident reported seeing another cat wounded by a similar bolt, and yet another resident reported to MPD that their child’s “playhouse” had been struck by an arrow-like projectile.

The problem, Alvarado said, is that the wounded cat and the playhouse that was struck were almost four miles apart, making it hard to pin down an exact location. The responding officer stated the cat seemed healthy and was likely capable of walking a reasonable distance.

After reporting the incident, the owner took the animal to a veterinary clinic where the bolt was safely removed. The cat is expected to make a full recovery.

The investigation is ongoing.

Anyone with information concerning this or other incidents of similar animal cruelty or criminal mischief are encouraged to contact the MPD at 520-568-3673.