Americans may have celebrated their independence a few weeks ago, but over 300 animals at a local shelter are still longing for their freedom.

The Pinal County Animal Care and Control is offering its “Celebrate Freedom” pricing for cats and dogs until the end of July, according to a Pinal County press release last week.

The reduced pricing is an effort by the county facility “to keep on track to be a no-kill shelter” as the number of homeless animals housed there swells to capacity.

“We do our best to keep dogs here as long as they can and sometimes that may not be the best for them since it can cause kennel craze and they are at risk of getting sick from the constant flow of new animals,” said shelter Acting Director Marybeth McCormack in the release.

Dogs known as “long timers” who have lived at the shelter for more than 90 days, come free of charge.

The most recent numbers provided by the release show the shelter is housing 57 cats and 261 dogs at 1150 S. Eleven Mile Corner Road in Casa Grande.

After adoption, all unaltered pets will be neutered or spayed, according to the press release.

A non-profit group seeking to start Maricopa’s first animal shelter held a fundraising event over the weekend to raise money for a facility.

“We are providing a multi-million-dollar facility, and that’s why we’re here raising money today … to pay our architect so we can start this building,” Crawford said.

She said she hopes the rescue group can eventually raise enough funds to break ground in less than a year.

The “dog days of summer” event held at the Copper Sky dog park Saturday was the group’s first effort in meeting that goal.

It featured a raffle, food vendors, music and various community organizations. The event provided kids the opportunity to cool off inside an inflatable pool and a slip and slide.

The most colorful attraction, however, was the dog painting competition.

Competing for a trophy, contestants used non-toxic paint and spray paint to express their creativity using their pup’s coats as canvases.

Although the event was canine-centered, Crawford said the future shelter and rescue would house not only dogs, but cats and horses too.

Plans for the shelter include training some of the shelter pets as full-service animals and companions.

“The best part is that we are taking animals from the shelter and working with two trainers to give dogs to veterans for PTSD,” Crawford said. “Then eventually we are going to be doing equine assisted therapy with some of our rescue horses.” 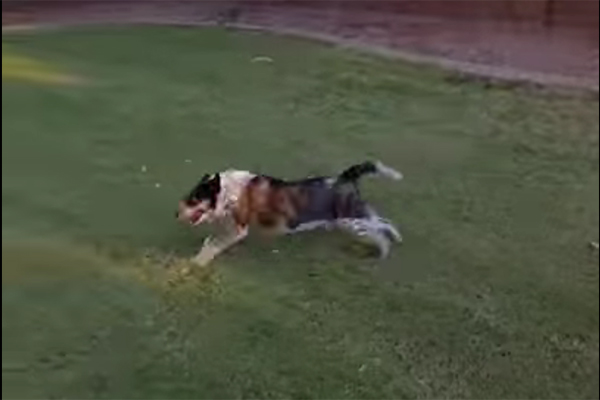 A dog named Root Beer was removed from an abusive situation and spent six months in the Pinal County shelter, where Maricopa’s Laura Salter and her son volunteer.

The Salters grew attached to the well socialized but ignored little dog and eventually adopted him. She shared this video of Root Beer being introduced to his new back yard.

The main Pinal County Animal Control shelter is in Casa Grande at 1150 S. Eleven Mile Corner Road. Call toll free at 1-888-431-1311. Learn more about the shelter and the available pets at http://pinalcountyaz.gov/AnimalControl/Pages/home.aspx