The National Weather Service has issued a Dust Storm Warning for Pinal County including the Maricopa area until 6:15 p.m.

An area of blowing dust was over Arizola and Casa Grande at 5:30 p.m. and moving south. There is less than a quarter-mile visibility with strong wind in excess of 40 mph. The conditions are considered dangerous and life-threatening to travel. Dust is expected to impact Interstate 10 and Interstate 8 as well as State Route 87.

If driving, avoid dust storms if possible. If caught in one, pull off the road, turn off your lights and keep your foot off the brake.

The National Weather Service in Phoenix has issued a dust storm warning for Pinal County on Tuesday.

A wall of dust was along the line extending 10 miles south of Maricopa, moving west at 30 mph. Hazard warnings, according to Doppler radar, include less than a quarter-mile of visibility with strong winds at least 40 mph. These hazards could lead to dangerous, life-threatening travel.

National Weather Service warns, “dust storms lead to dangerous driving conditions with visibility reduced to near zero. If driving, avoid dust storms if possible. If caught in one, pull off the road, turn off your lights and keep your foot off the brake.” The dust storm warning will last until 5 p.m. 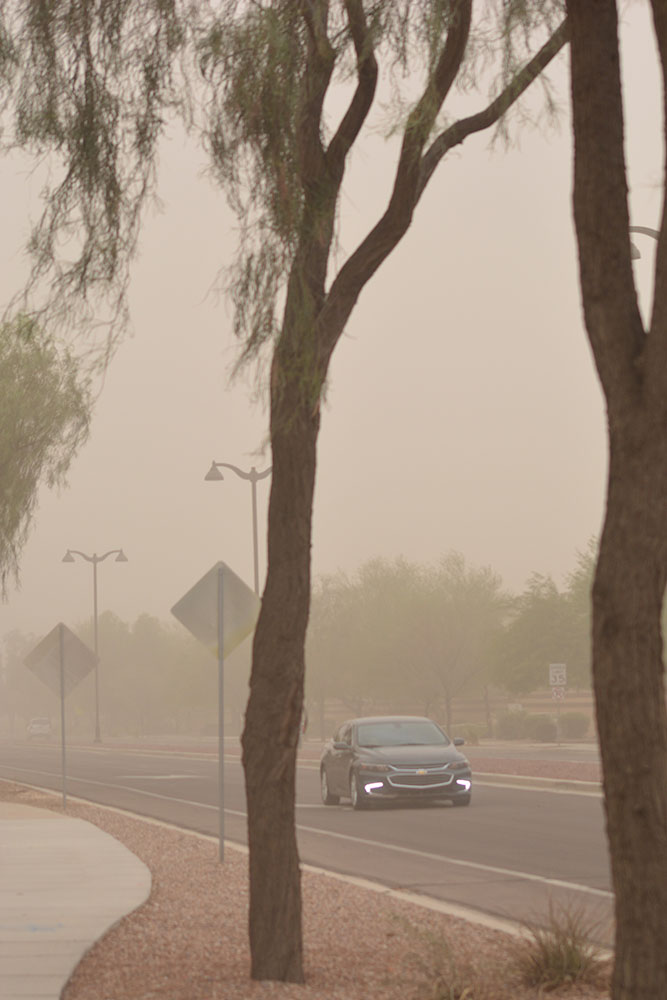 The National Weather Service has issued a blowing dust advisory, which is in effect until 5 p.m. today.

The impacted area includes State Route 347, Interstate 8 and Interstate 10. There have been some isolated reports of reduced visibility on the highways, according to NWS.

The weather forecast calls for winds from the east up to 30 mph causing visibility as low as a quarter mile in some areas.

Be ready for a sudden drop in visibility. If you encounter blowing dust or blowing sand on the roadway or see it approaching, pull off the road as far as possible and put your vehicle in park. Turn off the lights all the way and keep your foot off the brake pedal.

On a stretch of Interstate 10 between Tucson and Phoenix, sensors placed along the highway set off an alert: Dust, whipped up by gusting wind, is creating dangerous driving conditions.

Immediately, overhead electronic message boards alert drivers to the threat ahead. Programmable  signs next to the highway show a speed limit reduced from 75 mph to as slow as 35 mph. Closed-circuit cameras allow staff at the Arizona Department of Transportation’s Traffic Operations Center in Phoenix to see the real-time conditions on the roadway, while in-pavement sensors report the speed and flow of traffic.

This month, ADOT engineers are beginning design work to turn that seemingly futuristic vision into reality along a 10-mile stretch of I-10 where dust storms often develop suddenly.

Installation of the state-of-the-art dust-detection system is expected to begin by late next summer between milepost 209 near Eloy and milepost 219 near Picacho Peak, and the system could be in operation by fall 2018 or early 2019.

Sensors placed near the freeway will be able to detect dust as far as a mile or more away. That will give ADOT crews a chance to monitor conditions and alert the public about potentially hazardous situations.

“In addition to providing earlier warnings about blowing dust in an especially troublesome area, this innovative system will advance our understanding of whether similar systems can be effective in other locations around Arizona,” said Brent Cain, director of ADOT’s Transportation Systems Management and Operations Division.

Once the system is in use and evaluated, similar warning systems could be used in other dust-prone areas, including I-10 in both western and southeastern Arizona, and I-40. 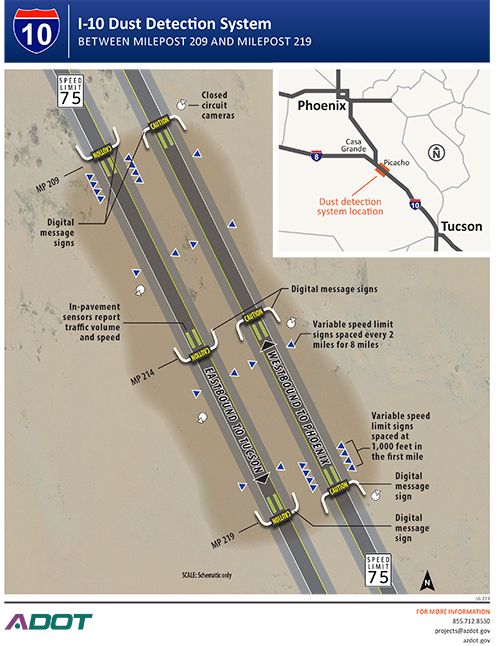 The system, estimated to cost $12.8 million, will be funded in part by a $54 million federal FASTLANE grant ADOT received for I-10 projects that also include widening and improving two of the three stretches between Phoenix and Tucson that aren’t already three lanes in each direction. Widening those areas and improving interchanges at State Route 87 near Eloy and Jimmie Kerr Boulevard in Casa Grande are scheduled to be completed by winter 2019.

Along with the threat from monsoon storms in the summer and fall, soil conditions in this area are such that strong wind any time of year can suddenly produce localized dust that severely reduces visibility, a phenomenon known as a dust channel.

ADOT’s plan calls for overhead message boards five miles apart in each direction between mileposts 209 and 219. Variable speed limit signs are to be placed every 1,000 feet for the first mile in each direction and then every two miles, allowing ADOT staff to lower the speed of traffic when dust is present. Closed-circuit cameras placed on poles will allow ADOT staff to confirm the latest conditions and traffic flow.

A key part of designing the system will be evaluating and selecting dust sensors. ADOT’s emphasis will be on accuracy, reliability and durability.

With a goal of making travel on I-10 safer and more efficient, ADOT Director John Halikowski and leaders of transportation departments in California, New Mexico and Texas recently created the I-10 Corridor Coalition. Halikowski said adding this detection-and-warning system will help achieve the coalition’s goals not only by saving lives but by reducing delays caused by dust-related crashes.

“While this detection and warning system will be a great step forward, no amount of technology will replace common sense when it comes to driving in adverse conditions such as blowing dust,” Halikowski added.

For additional information on dust storms and safety, including what to do if caught in blowing dust, visit pullasidestayalive.org.

Blowing dust is being blamed for a series of accidents in the southbound lanes of State Route 347.

There is a traffic back-up of about 2 miles from the Riggs Road interchange, according to the state’s Department of Transportation.

Motorists should plan for heavy delays and try to avoid the area. There is no estimated time to reopen the highway.

The National Weather Service has issued a blowing dust advisory in the area until 8 p.m. Expect gusts of 30-35 mph and visibility of less than a mile. This can lead to hazardous travel conditions.

If you encounter blowing dust or blowing sand on the roadway or see it approaching, pull off the road as far as possible and put your vehicle in park, turn off the lights and keep your foot off the brake pedal.

The Maricopa area is under another dust storm warning until 7 p.m. tonight and an excessive heat watch from late Thursday through Saturday evening.

According to the National Weather Service, north central and northwest Pinal County can expect wind gusts up to 40 mph and visibility less than a quarter of a mile.

Be ready for a sudden drop in visibility to near zero. If you encounter blowing dust or blowing sand on the roadway or see it approaching, pull off the road as far as possible and put your vehicle in park. Turn the lights all the way off and keep your foot off the brake pedal.

The excessive heat warning is triggered by temperatures of 112-116.

Drivers should be prepared for low visibility because of blowing dust today between Phoenix and Tucson as well as in southeastern Arizona, according to the Arizona Department of Transportation.

The National Weather Service has issued a blowing dust advisory from 3 p.m. to 7 p.m. The affected areas include Interstates 10 and 8 between Phoenix and Tucson, and along the portion of I-10 in southeastern Arizona’s Cochise County. Gusts of up to 50 mph are possible, which could produce widespread areas where visibility is reduced to less than one mile.

Motorists should be aware that strong winds can result in sudden periods of limited or zero visibility due to blowing dust. ADOT urges drivers to “Pull Aside, Stay Alive” when dust moves in. The following are driving tips when encountering a low-visibility dust storm:

·         Do not wait until poor visibility makes it difficult to safely pull off the roadway — do it as soon as possible. Completely exit the highway if you can.

·         If you encounter a dust storm, check traffic immediately around your vehicle (front, back and to the side) and begin slowing down.

·         Do not stop in a travel lane or in the emergency lane; look for a safe place to pull completely off the paved portion of the roadway.

·         Stop the vehicle in a position ensuring it is a safe distance from the main roadway and away from where other vehicles may travel.

·         Turn off all vehicle lights, including your emergency flashers.

·         Stay in the vehicle with your seat belts buckled and wait for the storm to pass.

·         Drivers of high-profile vehicles should be especially aware of changing weather conditions and travel at reduced speeds.

·         A driver’s alertness and safe driving ability is still the No. 1 factor in preventing crashes.

For the most current information about highway closures and restrictions statewide, visit ADOT’s Travel Information Site at www.az511.gov or call 511