Young scholars at Maricopa Elementary School presented their annual, end-of-school-year Leadership Day on Friday, showing off what they’ve learned this year as a “Lighthouse School” that extols the virtues of “The 7 Habits of Highly Effective People.” The morning includes special guests, classroom tours and spotlights on Special Olympians, perfect attendance and the Walk of Fame. 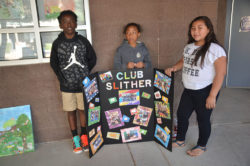 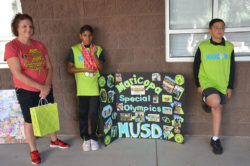 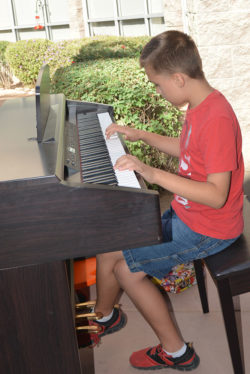 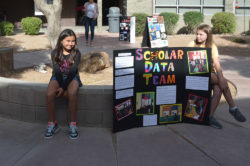 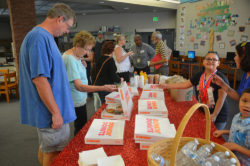 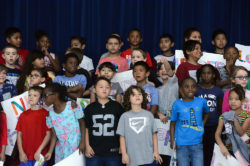 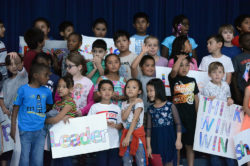 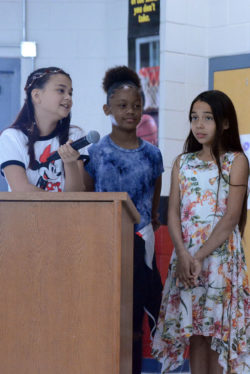 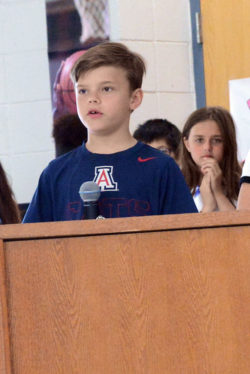 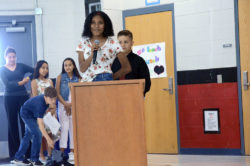 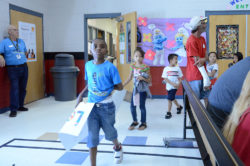 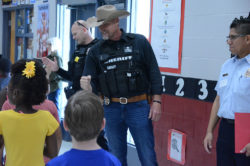 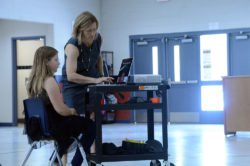 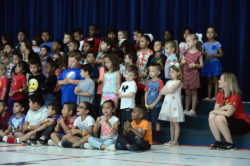 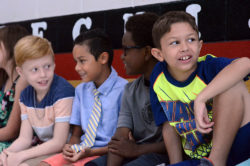 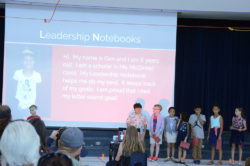 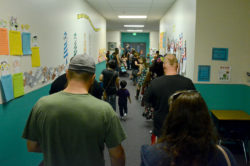 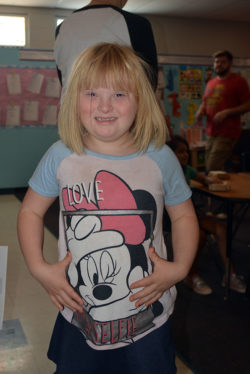 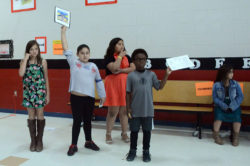 When Maricopa Elementary School became a “Leader in Me” Lighthouse school in February, it was an accomplishment students and staff had been working toward for four years.

Students, referred to as “scholars” by educators, practice the arts of prioritization, self-empowerment, leadership and accountability.

It was an achievement brought forth by a culture shift within the school. The Lighthouse designation recognizes outstanding progress within the Leader in Me framework.

“We look at scholars and believe everyone has genius,” said MES Principal Jennifer Robinson.

Students follow the format of “The 7 Habits of Highly Effective People,” the 1989 self-help book by Franklin Covey.

“It helps me by getting my work done early and turning it in so that I can be able to do things that I want to do like play games or help my teacher,” Norris said.

Students are assigned leadership roles as well, such as classroom greeters, line leaders and monitors. Scholars also focus on potential, motivation, change and education – paradigms that guide students through their educational pursuits.

Everyday in the classroom students like Jeremiah Crawford set “Wildly Important Goals” and compose the steps they believe will lead them to success.

“One of my goals is to get a 90 percent or higher on my math test,” Crawford said. The incoming sixth-grader said he accomplished it last school year.

One of the seven habits practiced by the school is synergize, where students are encouraged to solve problems by viewing a conflict through the eyes of another.

“I like when I see people working together and getting along because it makes the school happy,” Flores said.

The Leader in Me school, one of four in Arizona, has brought about results less measurable than test scores and less tangible than smiles, but important all the same.

One student said she felt empowered during public speaking events, even when her bravery may have faltered at first.

Robinson said that’s the ultimate goal she hopes scholars take with them as they grow in life – realizing anything they want to achieve is possible.

“That self-empowerment, and recognizing that they are the change and they can use their voice to make our world better,” Robinson added.

MES will retain its Lighthouse certification for two years, at which time the school can recertify through a virtual self-assessment.

This year, Maricopa Elementary School became just the fourth “Leader in Me” Lighthouse School in the state. Wednesday, its students helped explain the significance to the Maricopa Unified School District Governing Board.

“To achieve this recognition, we needed to demonstrate the elements of and meet the Lighthouse criteria,” MES Principal Jennifer Robinson said.

The five-year process is a school transformation drawn from Franklin Covey’s “The 7 Habits of Highly Effective People” and other materials produced by the Covey organization.

Each student has a leadership binder to keep track of school, class and individual efforts. Some students target reading, others math or a behavior goal, and all can track their own progress. 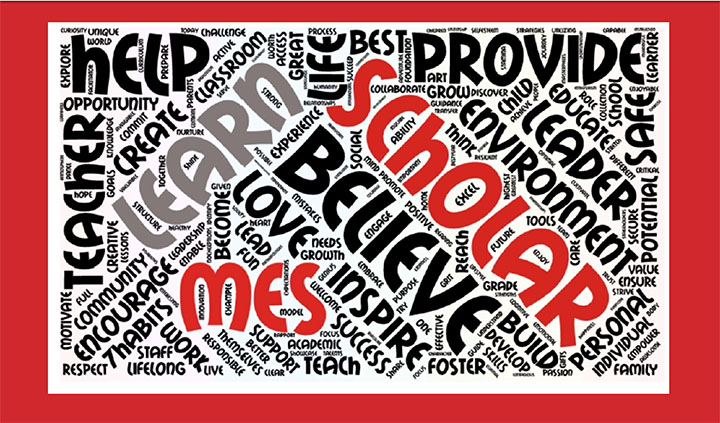 The program includes Wildly Important Goals, or WIGs. One of MES’s WIGs was to achieve Lighthouse status by May. The school reached that goal in February.

The school also achieved another WIG this year, having 80 percent of is scholars making expected growth in math and English language arts. It is close to meeting another WIG, having a daily attendance rate of 95 percent.

Progress is displayed prominently for the students to see how the school is doing.

Robinson said MES followed two Tempe schools (Kyrene) and one in Gilbert in receiving the designation. Since then, Luke Elementary in Glendale became the fifth Arizona school to achieve Lighthouse status.

Leader in Me recently updated to show 383 Lighthouse Schools worldwide and 3,307 schools in the process. 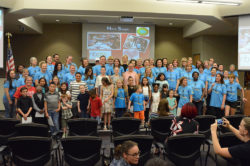 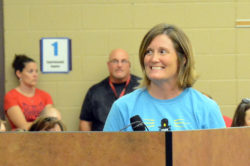 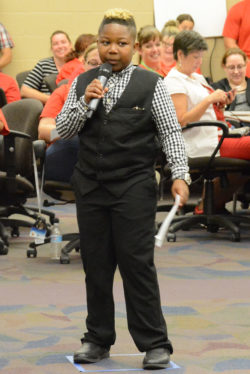 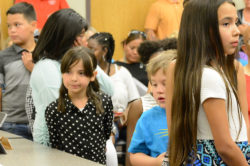 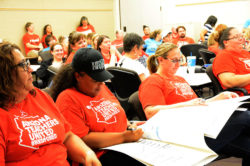 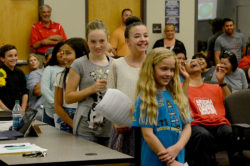 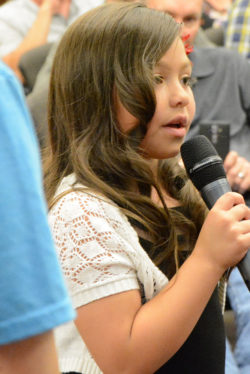 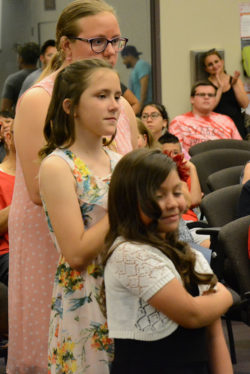 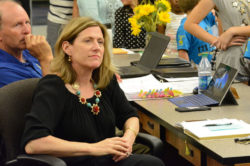 The scholars at Maricopa Elementary School had a chance to toot their own horns Friday as parents and community members gathered for Leadership Day.

Children spoke about the school’s “Leader in Me” program, an adaptation of “The 7 Habits of Happy Kids” by Stephen and Sean Covey. They also performed some rap and rock to celebrate what they’ve learned during the year and demonstrated physical exercises.

Principal Jennifer Robinson said the school is in the process of becoming a Lighthouse school. That milestone in the Leader in Me program indicates student achievement and is a five-year process focusing on leadership, culture and academics. There are currently 310 Lighthouse schools in the world but only two in Arizona.

“Soon there will be three,” Robinson said.

The program encourages placing students in leadership positions. Friday, the students oversaw welcoming and signing in visitors, explaining the clubs and activities displayed in the courtyard and leading tours of the facility.

Maricopa Elementary School has been collecting donations of supplies for the Against Abuse women/children shelter in Maricopa. The Leadership After School Program, run by third-grade teacher Jamie Shorey, made posters, decorated boxes and sorted the items donated. They will continue collecting after winter break to make the donation to Against Abuse in the spring. Against Abuse representative and MUSD Governing Board member Torri Anderson stopped by to see the collection so far.

MES Against Abuse Donations
1 of 3

The ladies of the Kappa Eta Sigma Chapter of Sigma Gamma Rho Sorority Inc. will host a Women’s Day Scholarship Brunch – “Dedicated to Service, Committed to Progress.” Seven women in Arizona, including four from Maricopa, will be honored for their service.

In addition, the chapter is raising money for book scholarships. The goal is to demonstrate that when we work together, we create a strong “community village” positioned to support our young people. All district staff is invited to attend.

This community service event will be May 7 at Scottsdale Marriott Suites Old Town, 7325 E. Third Ave., Scottsdale, from 10 a.m. to 2 p.m.

Maricopa Unified School District released the following statement regarding a lockdown that occurred Sept. 24 at Maricopa Elementary School (a day after a lockdown at the high school) when a student reported seeing a stranger on campus:

“The Maricopa Unified School District in cooperation with the Maricopa Police Department has determined that a student’s claim of an unauthorized person on campus on Thursday, Sept. 24, was a false report.  The incident resulted in a school-wide lockdown and then a systematic search of the entire campus by the Maricopa Police Department.  For one hour, over 750 students and affected staff were confined to locked classrooms without any educational instruction taking place. The student is being held accountable for the action, and any subsequent disciplinary action is being handled in accordance with the District’s Student Handbook and Board Policy.  Student and staff safety are a high priority with the District.  False reporting of a potential threat will not be tolerated and anyone disrupting a school setting based on a false report will be held accountable for their actions.  The District would like to once again thank the Maricopa Police Department for their support and their assistance in making our campuses safe, educational environments for students and staff.”

“I’m learning a lot,” Leach said throughout the day.

Maricopa Elementary and Maricopa Wells Middle School hosted the District 11 Republican as part of an initiative to “expose Arizona legislators to highly effective teachers working within an authentic classroom experience.”

Leach shadowed Angelia Ebner, the vice president of the Maricopa Education Association and a nationally board certified teacher, at MES. Ebner also accompanied him as he toured MWMS with Treva Jenkins, an Arizona Master Teacher and K-12 Center Mentor Teacher, and students Steel Lewis and Cassidy Zimmerman.

He looked in on a history class with Keith Gibson and, as a history major, swapped notes with the 30-year teaching veteran. Leach also looked at the computer lab and other tech rooms, a Spanish class, a Special Education class and more.

He spoke with teachers about everything from furniture to computer servers. Leach particularly noted the extra effort needed to gain certification in Arizona even for those veteran teachers long certified in other states with tougher certification processes. He said it was contributing to the teacher shortage.

“We, and I mean we the Legislature, need to find a way not to put up roadblocks,” he said.

Eighth graders Cassidy and Steel fielded questions from the politician and others, ready to explain classrooms and programs. When asked by Ebner what she tells parents who ask her why their children should attend MWMS, Cassidy said there is an outdated misconception that it is a bad school. “They should definitely come here and find out,” she said.

The ladies of the Kappa Eta Sigma Chapter of Sigma Gamma Rho Sorority Inc. will host a Women’s Day Scholarship Brunch – “Dedicated to Service, Committed to Progress.” Seven women in Arizona, including four from Maricopa, will be honored for their service.

In addition, the chapter is raising money for book scholarships. The goal is to demonstrate that when we work together, we create a strong “community village” positioned to support our young people. All district staff is invited to attend.

This community service event will be May 7 at Scottsdale Marriott Suites Old Town, 7325 E. Third Ave., Scottsdale, from 10 a.m. to 2 p.m.