For an after-dark cool-down, Copper Sky Aquatic Center hosted the annual Dive-In Movie as part of the Movies under the Stars series of outdoor movies June 15. Families swam in the pools and played on the splash pad while watching Aquaman on the inflatable big screen. 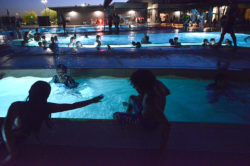 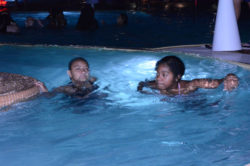 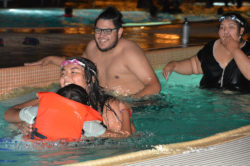 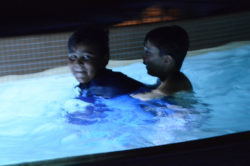 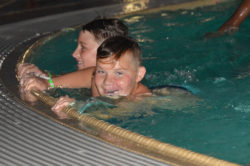 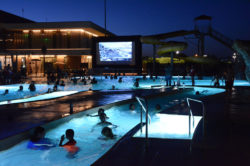 Films were submitted locally, from across the country and from around the world. As short films they are limited to 20 minutes in length.

“We have so many well-rated films,” organizer Shelley Gillespie said. “We have more films ranked 9 or higher (out of 10) than the past two years.”

Food trucks will be available both days of the festival, and those not attending the festival are welcome to drop by for a bite, too. The food trucks scheduled to participate Grandma’s Navajo Frybread, which will be on location both days, La Petite Provence, which specializes in French desserts, The Lemongrass Shack (Cambodian street food) and, possibly, When Pigs Fly.

Saturday, the films will be by high school and middle school students, including seven films made by Maricopans. They will be shown in the Performing Arts Center auditorium at Maricopa High School.

The Black Box Theatre at the PAC will be the site of Saturday’s workshop, as well:

Register for the free workshops at CopaShortsFilmFest.org.

MHS students from DECA and National Honor Society will help run the festival. DECA also created shirts for the event.

“DECA are going to do amazing things for us,” Gillespie said. “We know they’re really solid. They’re hard-working. They’re thinking about business, and that’s helpful.”

Sunday, the action moves to Maricopa City Hall. There will be a silent auction on display starting at 11 a.m. The film blocks start a noon featuring movies by professional filmmakers. The second block includes a table read by local actors of a screenplay, followed by the screening of the filmed version.

Tickets are sold by block, day pass or VIP.

The Wrap Party is at 7 p.m. with entertainment by musician Beth Lederman and presentation of awards. Because the night coincides with the Academy Awards, there will be a red-carpet Oscar Night celebration, and attendees are encouraged to glam it up.

Admission to the party is $25.

This story appears in the February issue of InMaricopa.

Copa Shorts Film Festival is in the final planning stages for its second annual event in February.

All entries were rated on a scale of 1 to 10 by at least two of 18 judges empaneled by organizers. The short films rated 7-10 were placed in the festival. They have now been divided into two-hour film blocks.

All films must be no longer than 20 minutes. Festival Executive Director Shelley Gillespie said this year’s films are trending longer than the entries in the inaugural festival.

“Last year films were averaging, I would say, 10-12 minutes,” Gillespie said. “Now we have one that’s 15 minutes, one that’s 19 minutes and 50 seconds, one that’s 16 minutes, so we’re averaging 8-9 films in some of the categories per film block. Yet one of the very best films in the military-veteran categories is just five minutes.”

One of the special categories for films created by military veterans. The festival also includes Native American films, student films and college films.

Shelley and Roger Gillespie, the festival director, took a special trip to San Diego to drum more films veterans, and it paid off.

While the general admission to a film block is $12, for military veterans and senior it will be $10. However, someone wants to get as many veterans in as possible.

“This anonymous challenger has said, ‘I will give you $5 of the ticket price for every military veteran or the first 100 that show up.’ That’s a lot,” Shelley Gillespie said. “But I want to challenge somebody to give the other $5 so that they can actually get in free to see these movies.”

The student category is for filmmakers in junior high or high school. Gillespie said there has been a marked improvement in the quality of the student films, noting one even received an 8 rating.

“It’s showing that they learned,” Gillespie said. “Joe Szoltysik and Janell Hudson at the middle schools asked us to come in and talk about what reviewers look for in a film. We emphasized, ‘We’ve got to hear your sound.’ I was so thrilled to see that some were much more proficient than they were last year.”

After a complaint last year from parents of middle schoolers who stayed after the student-film screening to see shorts by other filmmakers and discovered harsh language and situations, the more “mature” films have been placed in a block of their own, the last film block on Saturday night.

The festival is open to all genres and this year landed animation, drama, documentary, sci-fi, horror and a few comedies. Set for the Feb. 16-18, the festival has tickets available for its film blocks and other activities on its website.

Copa Shorts Film Festival will again have free workshops. Matthew Earl Jones, the director of the Arizona Office of Film and Media, will present “Filming in Arizona: What Arizona Can Do for You.” Cinematographer Steve Wargo will present “Drones, Moviemaking and the FAA: Rules, Rules, Rules.” Stephen Wade Nebgen, an entertainment attorney, will discuss “Film Funding: Show Me the Money.”

Though the workshops are free of charge, attendees need to register in advance.

Films will be screened at UltraStar Multi-tainment Center. Workshops will be next door in the Elements Event Center.

The outdoor event series Movies Under the Stars had its big finale with the Dive-In Movie at the Copper Sky Aquatics Center on Saturday. The combined sponsorship of the City of Maricopa and UltraStar Multi-tainment Center created the spring series of films shown outside, with the audience bringing lawn chairs and blankets. The Dive-In audience, however, experienced The LEGO Batman Movie from the pools, making it a memorably wet occasion.

With 56 movies and a table read of four screenplays, the Copa Shorts Film Fest debuted during the weekend, drawing movie-makers and some fans to UltraStar Multi-tainment Center.

All films were 20 minutes or shorter, making for a quick and often quirky experience, with various skill levels on display.

For the filmmakers, it was an opportunity to network and compare notes.

“We wanted to go to festivals that were starting out,” said Emily Skyle, a news anchor-turned-filmmaker who brought the comedy Dear George. “We wanted an eclectic mix. When we first submitted here, we didn’t know how it would be received.”

It turned out Dear George was quite well received at other festivals, winning a top award in a Nevada festival, before it was screened in Maricopa. Skyle said she was pleased to see Copa Shorts was in a movie complex and “not in someone’s basement, though that’s respectable, too. But we knew it was going to get a beautiful viewing here.”

After shifting out of journalism and into improv comedy, she became a screenwriter. With Dear George, however, she did not feel she could trust another director with the quirkiness of the characters and the story. So she became director and producer as well.

Filming in Reno, Nevada, she had a $5,000 budget. An airplane was donated to them, a big way to stretch a small budget, and Reno allowed them to shut down streets for filming. She said she is proud the little film has achieved what it has while going up against films with budgets approaching $100,000.

Melanie Watts, a Maricopan whose daughter Izzy played the central character in Belly Flop, said she was amazed at what some filmmakers created on tiny budgets, even as low as $50.

“I know Izzy’s film was like $20,000,” she said. “They did it all on Kickstarter, and they had someone ‘give’ them the house, and maybe that was because they were doing it in L.A.”

Belly Flop was the judges’ pick for Best of Fest. Izzy Watts was 9 years old during filming and is now 13. She picked up the award for filmmakers Marc Gaudioso and Amy Ball. The Audience Choice Award went to the dark comedy A King’s Betrayal, about the brief life of a piñata.

“It went well. We had a goodly number of filmmakers show up, though I would have liked to have seen more people come,” festival co-director Shelley Gillespie said. “We had all of our screenplay finalists show up. We had one who forgot about the time zone change but he came in right when they were starting to read his screenplay.”

It was a rainy weekend for the festival, which turned some Maricopans into moviegoers while keeping some filmmakers from showing up.

“We had some people come in from L.A. in spite of the weather, and I was really surprised,” co-director Roger Gillespie said. “Of course, some couldn’t come because of the weather where they were. The ones that did come were very impressed.”

In a sure sign of summer, the last 2nd Saturday Maricopa Market of the season is this week while summertime activities are just getting started. For details on the following events and others, or to add your own, visit InMaricopa.com/Calendar.

A Ray of Hope meeting of Narcotics Anonymous is at 7 p.m. at Maricopa Community Church, 44977 W. Hathaway Ave.

A Ray of Hope meeting of Narcotics Anonymous is at 7 p.m. at Ak-Chin Social Services, 48227 W. Farrell Road.

Mental Health Awareness Event is from 10 a.m. to noon on the Great Lawn at Copper Sky Regional Park, 55345 W. Martin Luther King Jr. Blvd. The awareness event is in honor of individuals and families coping with mental illness.