Westbound I-10 to close south of Loop 202 Santan Freeway this weekend
Crews replacing overhead signs for new South Mountain Freeway interchange
PHOENIX – Westbound Interstate 10 will be closed between State Route 347 (Queen Creek Road) and Loop 202 (Santan Freeway) this weekend so Arizona Department of Transportation crews can remove and replace overhead signs for the system interchange with the Loop 202 South Mountain Freeway.
Westbound I-10 will close from 10 p.m. Friday, June 21, to 5 a.m. Monday, June 24. Two additional closures will be scheduled later this summer to complete sign removal and replacement. The westbound I-10 on-ramps at Queen Creek Road and the westbound on-and-off ramps at Wild Horse Pass Boulevard also will be closed.
Westbound I-10 drivers will exit I-10 at Queen Creek Road, travel east to Price Road, north to Loop 202 (Santan Freeway) and then east to return to I-10. Local business access from westbound I-10 to the Gila River Hotel & Casino area will be available by traveling west on State Route 347 and north on Maricopa Road.
The South Mountain Freeway will connect with I-10 to the west in line with the Santan Freeway. Construction is scheduled for full completion in 2020, although traffic is expected to begin using the freeway earlier.
The 22-mile South Mountain, the largest freeway construction project in Arizona history, will provide a long-planned direct link between the East Valley and West Valley and a much-needed alternative to I-10 through downtown Phoenix. Approved by Maricopa County voters in 1985 and again in 2004 as part of a comprehensive regional transportation plan, the South Mountain Freeway will complete the Loop 202 and Loop 101 freeway system in the Valley.
For information on the project, visit SouthMountainFreeway.com.

The Department of Public Safety released the identity of the ATV driver who died in a collision on State Route 347 south of Maricopa yesterday.

DPS said Dearo-Garcia was driving a Honda quad that failed to stop at a stop sign while attempting to make a right turn onto SR 347 near SR 84.

“The ATV collided with the rear side of a Ford heavy-duty pickup truck,” Graves said.

The collision closed a portion of SR 347 for hours after emergency crews and police processed the scene.

Graves said the driver of the truck was not injured.

State Route 347 will remain closed in both directions throughout the evening following an earlier crash at Riggs Road, according to the Arizona Department of Transportation.

Southbound lanes are closed at Interstate 10. Troopers are directing northbound traffic onto Riggs.

Delays on I-10 are extensive due to detouring traffic which stretches from Chandler  Boulevard to Casa Blanca Road. Spillover traffic is also affected the southbound lanes of neighboring SR 587 and 87

Motorists planning to travel on I-10 eastbound through the Valley should consider taking SR 85 near Buckeye to I-8 instead. I-8 reconnects to I-10 near Casa Grande. 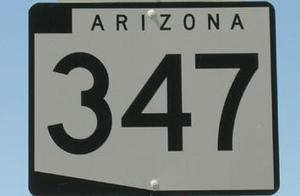 A crash has closed both directions of travel on State Route 347 at Riggs Road, according to the Arizona Department of Transportation.

Specifics on the accident are not yet available. A motorist at the scene reported seeing several ambulances on site and children on the side of the road.

There is no established freeway detour and no estimated time to reopen the roadway. Motorist should plan an alternate route.

“It appears 10 vehicles are involved in this serious injury collision which occurred at 2:47 p.m.,” DPS spokesman Bart Graves said. “Our preliminary investigation indicates this may be a cross over collision at Riggs Road at State Route 347.”

An apparently speeding vehicle led a Pinal County Sheriff’s deputy on a chase on State Route 347 Tuesday afternoon. In the end, the driver and passenger escaped but the abandoned vehicle was allegedly found to be carrying 451 pounds of marijuana.

The deputy spotted the 2002 GMC Yukon traveling at a high rate of speed south of Maricopa on SR 347 around 5:41 p.m. When he tried to pull over the vehicle, the driver did not stop and the pursuit was initiated.

After leaving the highway, the Yukon ran a stop sign and eventually stopped at the intersection of Dune Shadow Road and Hidden Valley Road. The driver and a passenger in the front seat ran west into the desert.

“As the deputy approached the vehicle to make sure it was clear, he observed several large bundles in the rear cargo area wrapped in camouflage material,” Sheriff Paul Babeu said. “The bundles contained 451 pounds of marijuana. The driver and passenger were not located.”

The vehicle and marijuana was seized and detectives will follow up on the case with the registered owner, according to PCSO.