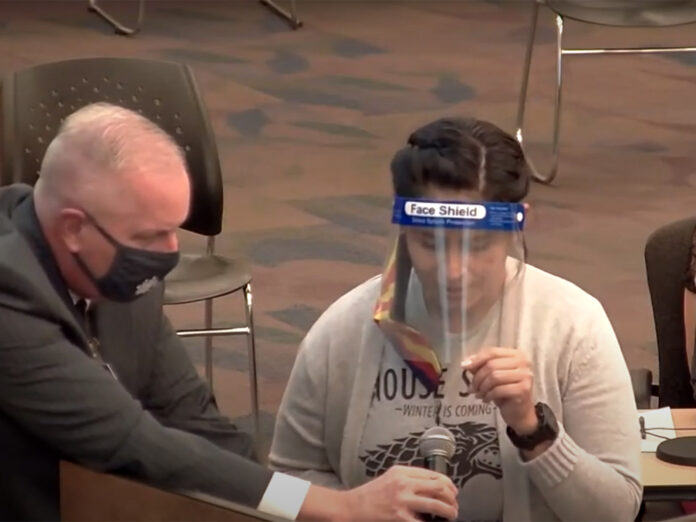 Teachers expressed disappointment and anger Wednesday night as they spoke against reopening campuses before fall break in sharp contrast to the frustrated parents who had called for a quick opening of in-person classes the week before.

Staff members of Maricopa Unified School District spoke in person and emailed comments to the governing board in response to the board’s decision to return to class. A student who is the daughter of a teacher also protested the decision.

Saying she was sticking up for the “slackers and procrastinators,” Gaul said by bringing back secondary classes two weeks before fall break, they were interrupting the ability to do make-up work to finish the quarter.

MHS teacher Marcela Quiroz echoed that view, saying there was no time for students to complete missing assignments. She said the board was dismissing the knowledge of the superintendent and two secondary principals who explained during last week’s special meeting the complications of shifting from online to in-person.

Quiroz challenged the board members to visit the MHS campus and watch the process of putting together a new master plan.

“Maybe next time you’ll consider the advice of your experts,” she said.

Santa Rosa Elementary teacher Kyrie Hughes said Wednesday she was extremely disappointed in the board’s decision. For family and health reasons, she said in-person classes is not an option and she will teach students who will continue online.

Hughes said she is currently assigned to teach 41 students, but compensation for overload has not been decided.

“To return is dangerous and irresponsible,” student Lola Miller wrote in a call to the public message.

She said bringing students back on campus will guarantee another outbreak in Maricopa. But she was most concerned about her mother, an MUSD art teacher.

“My mother will be face to face with hundreds of kids every day, and as her daughter I am horrified. Lauren Wong is a single mother of three, and she is my lifeline,” she said. “And if my mom gets sick, me and my two little siblings also get sick. A sick mother can’t also care for three sick children. So many selfless teachers are returning in absolute fear. Most of these teachers are parents, and their kids matter, too.”

A group of teachers, mostly from MHS, also penned a message to be read as a call to the public, urging the board to rethink the decision. They said the 3-2 vote “felt like a punch in the gut” and was at odds with the unified approach MUSD had created.

They said the mid-September return will cost valuable instruction time. They felt the decision was based on wishful thinking by some parents that all will be normal again when students return to campus. That wishful thinking, they said, replaced good judgment and “glossed over” the concerns of secondary administrators.

The board also heard from two parents in favor of reopening classrooms as soon as possible.