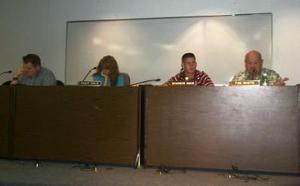 During a discussion about new positions in the district and a reclassification of the nursing department at Wednesday’s school board meeting, board members became agitated, exchanging comments that many considered less than professional.

The conversation started with the agenda item requesting approval of 50 new positions in the district, positions previously approved for the 2008-09 school year and to be filled for the remainder of the current school year. The positions include teachers, substitutes, coaches and administrative positions.

Director of Human Resources Heidi Fawcett was unable to attend the meeting, prompting board member Tim White to request the vote be tabled until the Dec.19 meeting. White had additional questions he felt Fawcett could answer.

Finance Director Burnie Hibbard explained to the board that the positions needed to be filled as soon as possible to reduce overcrowding in the classrooms with more than 30 students. Additionally, positions based on grants can only be used this year.

The vote to table the discussion for another meeting resulted in a 2-2 tie, followed by a vote to approve the positions, which passed 3-1 with White voting against the measure. Board President Jim Chaston was not in attendance.

Approval for the reclassification of the nursing department was also on the board’s agenda. Hibbard explained the plan to have more nurses or medical assistants on the school campuses instead of at the district office. The changes would add two new positions at the schools, remove one position at the district and reduce the director level of the remaining nurse in the district.

White was angered that the district nurse would be at a lower director level and would receive less pay.

“I thought we were trying to make competitive wages so that we could bring quality people into Maricopa, and now you are telling me we are going to lower the salaries we already approved to increase,” White said.

Board member Shannon Amos attempted to explain to White that the reclassification actually brought more qualified nurses to the district, which would lower the responsibilities of the district nurse, warranting her reduction in salary.

“Well then just vote it in like you’ve done with everything else,” White responded.

Amos then, sarcastically, thanked White for his professionalism.

At this point Vice President Tracy Davis said, “All right, boys,” to which Amos took offense because he said he was only trying to explain the situation to White.

The reclassification did finally pass 3-1 with White the lone “nay” vote.

White’s temper flared again when Davis asked Hibbard and Superintendent Dr. John Flores why positions had been posted on the district’s Web site when the board had not yet approved the resignations.

Hibbard explained that no offers were given to applicants, but, by posting the position, the application and interview process could begin prior to approval from the board.

To which White replied: “This once again shows that this board is not in control, and you will continue to do whatever you want.”

Amos asked Hibbard if posting the positions to be filled prior to approving the resignations would put the district at risk. Hibbard said no, which prompted Davis to ask if, at the very least, the board could be notified either in person or over the phone of all resignations before a posting goes up on the Web site.

Davis said she believed the issue had been discussed before and planned to find the form of communication previously agreed upon.