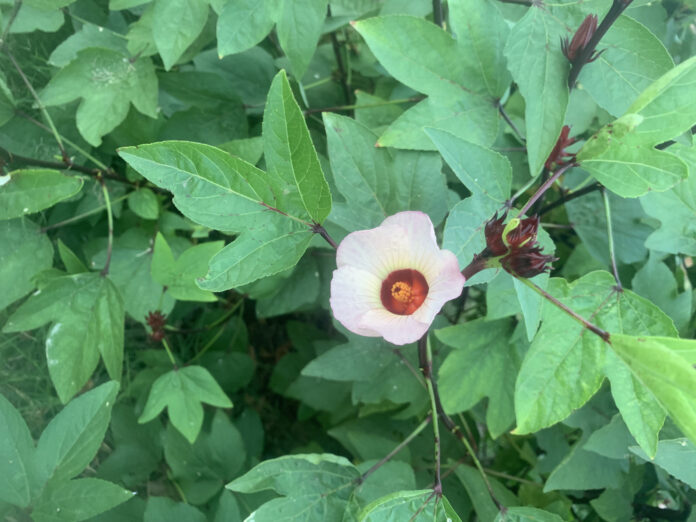 Hibiscus sabdariffa or roselle, is known by a number of names across the world, including Jamaican sorrel, Flor da Jamaica, Florida cranberry, Red Thai Hibiscus, red sorrel and many others. Originally from Africa, the roselle is now grown throughout the tropics and subtropics and is an important agricultural crop in east Asia, Africa and southeast Asia. I was first introduced to roselle plants 10 years ago while researching resilient food-producing plants that my children would eat willingly, and for the last 10 years my family has looked forward to the harvest each fall.

The roselle, a perennial in the tropics, is grown successfully as an annual in our local area in well-drained fertile soil. Planted in the early spring, the roselle grows quickly but does not draw your attention until late in the summer when this okra relative thrives. The heat and sun of Arizona encourage the roselle growth with plants reaching up to 8 feet in height and width. It is in late summer, when many other plants are struggling from the heat of the Arizona summer, that the roselle becomes the center of the garden in full bloom.

Roselles are large, striking bushes producing multiple flowers per branch that attract hummingbirds and beneficial insects to the garden during late summer and into the fall. It is from the base of these flowers that the noteworthy fruit develops. The bright red fruit called the calyx develops at the base of the flowers, surrounding the seed pod, becoming fully ripe a few days after the flower dies back. The fruit is sour tasting, similar to a cranberry, and is harvested from late October until the first frost. The calyces are not the only edible portions of the roselle plant. The leaves and young sprouts of the plant can be used in salads raw or cooked in vegetable dishes. The seed pods are a source of pectin and the seeds can be roasted, used in soups, or as a coffee substitute.

The outer petals of the red calyces, which are sources of calcium, niacin, riboflavin and iron, are harvested by removing the outer red petals from the center seed pod. The outer petals of the calyces can be eaten raw, harvested for use in a number of recipes, or preserved by dehydration. The fresh calyces are used in a variety of drinks such as a traditional Jamaican Christmas drink, a “cranberry” sauce or relish, simple flavored syrup, as a replacement for cranberries in recipes, used to make jelly with the seed pods as a source of pectin, and dried for tea.

The roselle is a striking addition to any landscape, thriving in the summer heat and soils in our area and producing a unique versatile fruit.

This story was first published in the December edition of InMaricopa magazine.