Incumbent Teresa Martinez, a Republican, is holding her lead, but Democratic challenger Keith Seaman has moved back in front of Republican Rob Hudelson in the race for the second seat in the state House of Representatives in District 16. 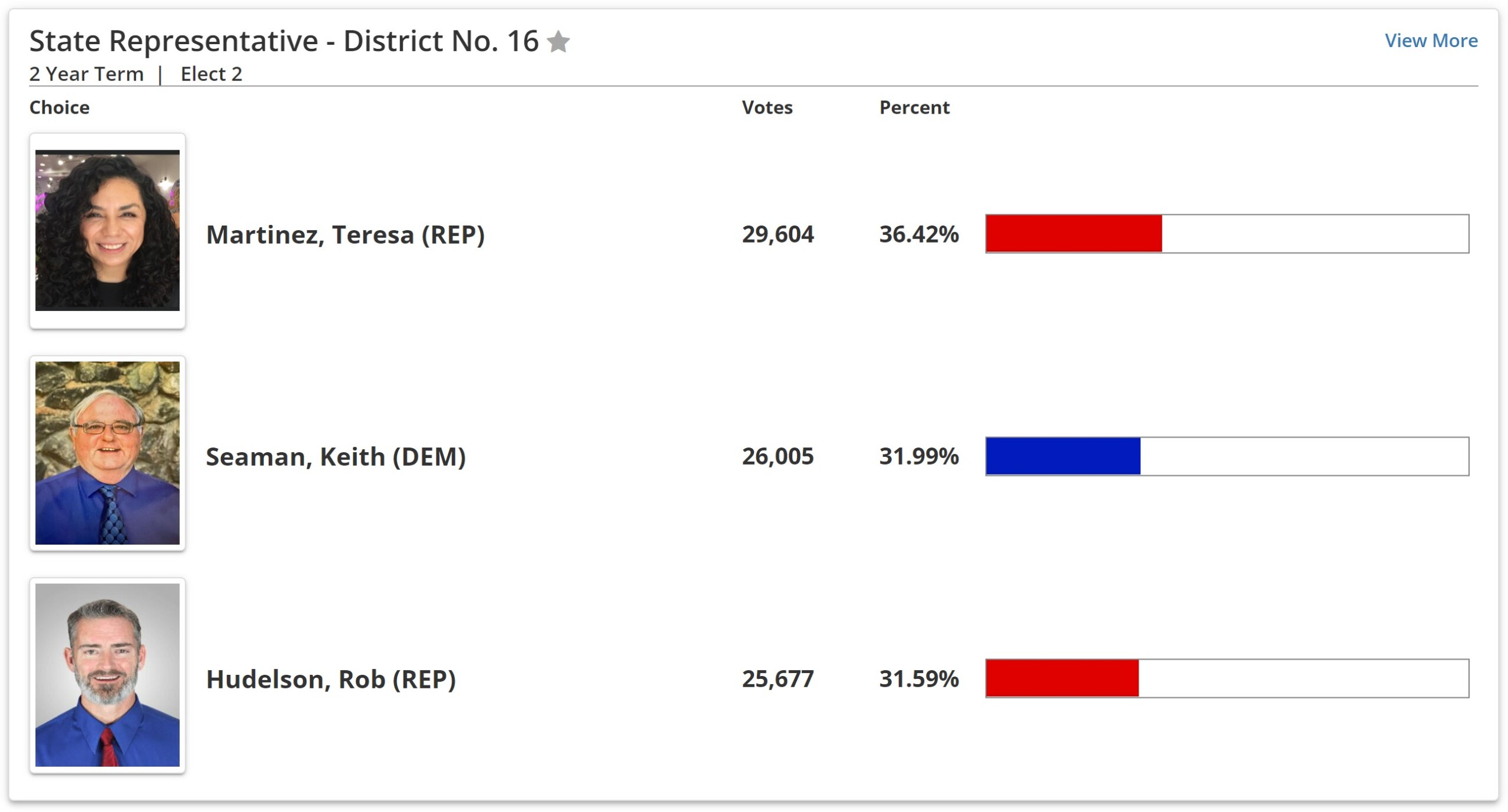 The top two vote getters among the three are elected from the district, which represents Maricopa.

The battle for the second position remains tight, with just 328 votes, or 0.4 percentage points, separating Seaman and Hudelson. Martinez gained separation from her competitors overnight to lead the pack and now leads Seaman and Hudelson by nearly 3,600 votes.

“Yes, it’s closer than I thought it would be,” Martinez said. “From my understanding, and I could be wrong … the early ballots were more for Democrats than for Republicans. Just being out at the polls, it seemed like a lot of Republicans voting in person. Another thing is, it was such a long ballot, we had a lot of stuff to vote on, so I think took longer to count.

“Seaman surprised me. I didn’t see him anywhere. Not once did he mention 347 during the campaign. Planned Parenthood spent over $130,000 to ask people to just vote for him. There’s a lot of money out there. I certainly didn’t have $130,000 to spend on my race. I think a lot of Democrats only voted for him and didn’t cast a second vote, whereas I think Republicans and independents who lean right voted for Rob and myself.”

Martinez was appointed to replace Bret Roberts, who was elected in LD11 but resigned his seat Sept. 30. The boundaries of the district were redrawn as part of the redistricting process that takes place every 10 years, moving Martinez to LD16. She was appointed to fill Roberts’ term by the Pinal County Supervisors in October.

Martinez is a Casa Grande native, who began her career as a long-term substitute teacher at her alma mater, Casa Grande Union High School. She also worked at the Frito-Lay factory in Casa Grande prior to entering politics. She has held multiple positions for two members of the U.S. House of Representatives and the Arizona Secretary of State over the past 20 years.

Hudelson won the August Republican primary over Martinez by a margin of 51.3% to 48.7%. Seaman was unopposed in the Democratic primary.

“I’m on pins and needles,” Hudelson said. “You just hold your breath and see what the Lord does. Pinal County results are all in. It’s Pima County I’m a little more concerned about. We have high hopes, and there are a lot of encouraging factors, but the rest remains to be seen. I feel like (Seaman’s) policies line up a little more with Pima County voters than with Pinal County.

Hudelson, a U.S. Navy veteran who fought in the Gulf War, has served as Pastor of Legacy Baptist Church for 16 years. He has been married for 28 years and has seven children and four grandchildren. He has lived in Arizona for 17 years and has been in Christian ministry for 27 years. He served as a City Councilmember in Coolidge for four years, from 2015-19.

Seaman is a resident of Casa Grande who has lived in Arizona since taking his first job as a teacher in Lake Havasu City in 1974. He is a veteran of both the U.S. Air Force and Army Reserve who spent more than 40 years as a public-school teacher, principal, and superintendent in Mohave County.

Legislative District 16 stretches from the northern edge of the Gila River Indian Community in the northeast and follows State Route 347 and Interstate 10 to the south. The district’s southern border reaches the eastern edge of Tucson.

It includes the cities of Maricopa, Casa Grande, Florence, Sacaton and Arizona City.

Please check back. This story will be updated as the latest returns are released.