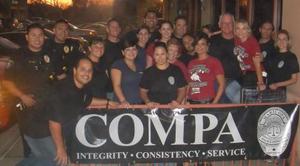 Special Olympics was the big winner this week as the City of Maricopa Police Association and the Native New Yorker partnered for the first-ever COMPA Tip-a-Cop fundraiser on Thursday night.

A full house of supporters gathered at the restaurant to be pampered by COMPA police officers all in the name of Special Olympics-Arizona. COMPA received more than $700 in tips alone, according to organizers.

The event surpassed the group’s $500 contribution goal, which was a strong finish to the Special Olympics Unified Triathlon fundraiser held last Saturday.

Local Special Olympics supporters who were unable to attend the fundraiser may still contribute by visiting www.soazunifiedtriathlon.kintera.org/maricopacompas.