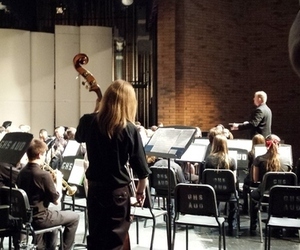 The Maricopa High School chamber orchestra and concert band performed recently at the Arizona Band and Orchestra Directors Association Area Concert Festival under the direction of teacher Ivan Pour, according to a district press release.

“The MHS orchestra performed at McClintock High School on Feb. 20 and had a wonderful clinic with Mr. Nicholas Ross from Northern Arizona University,” district Superintendent Steve Chestnut said in the release.

The orchestra's final festival performance will be on April 17 at a festival at Eastern Arizona College in the town of Thatcher in southeast Arizona, according to the release.

“The MHS Concert Band received a rating of ‘excellent’ for their performance (the second-highest rating) and will advance to perform in the State Concert Festival in early May,” Chestnut stated in the release. “We are very proud of the hard work of the MHS Band and Orchestra students and we invite you to their performance at 7 p.m. in the MHS Performing Arts Center on May 8 at our Year-End music concert.”