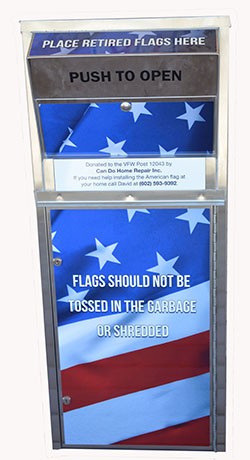 As part of its Memorial Day ceremonies, Veterans of Foreign Wars Post 12043 dedicated a flag receptacle in which people can properly dispose of the Stars and Stripes.

The VFW had been using boxes to encourage people to turn in their worn flags, but Mike Kemery said people kept throwing trash in them. Vet Dave Hixon started looking for donations, and his company, Can Do Home Repair Inc., donated the red, white and blue, metal container.

It is bolted down in front of the Maricopa Veterans Center.

“We thought, ‘Wow, that old building never looked so good,’” said Kemery, who is now judge advocate with the VFW Department of Arizona.

U.S. flags can be deposited in the receptacle at any time. Veterans will collect the flags and dispose of them according to flag etiquette, which is to burn them.

Since the new box has been installed, the number of flags being brought to the center has increased.

“When we move to our new building, that’s coming with us,” Kemery said, referring to the veterans’ future center at what is now the city library.

The U.S. flag was established by the Flag Act, passed by the Second Continental Congress in 1777. It established the 13 stripes and the blue field bearing 13 stars. Subsequent flag acts dealt with changing numbers over time. Text in the Flag Act of 1818 established the tradition of adding a star to the flag on the next July 4 after a new state joined the union.

“The Mysterious Origins of the American Flag”