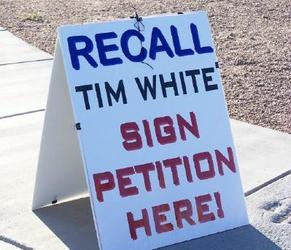 Members of the Independent Political Action Committee to Recall Timothy P. White were out in full force gathering signatures outside the various schools during Curriculum Night Tuesday.

The deadline for submitting signatures to the Pinal County Superintendent’s Office is Thursday, Sept. 6. In order to recall White, who is currently serving a four-year term as a Maricopa Unified School District governing board member, 606 signatures are needed.

“We believe we have about 500 signatures,” said Jake Romero. The committee will be out in the community this week to gather any additional signatures needed. Both Romero and committee member Matt Reese believe that getting signatures over the summer was difficult because so many people were out of town.

“We should have done this earlier,” acknowledged Reese.

According to Lezah Saunders, who heads the recall effort, “We have had many people showing interest and taking up the cause recently–it’s always deadlines that get people going!”

White, whose term expires in 2010, was elected as an incumbent last fall. The committee has taken issue with behavior and speech seen as unprofessional in White’s public criticism of Superintendent Dr. John Flores and Administrator of Business Services Mark Busch, as well as fellow board members, particularly Board President Jim Chaston.

Following the submission of the signatures, White will have 60 days to respond or resign although he has indicated that no resignation will occur. He told inmaricopa.com that he wants the recall to go to ballot so he can be re-elected.

Once the signatures are turned in, the county’s election department will validate them prior to the recall appearing as a one-issue ballot in early November.