Whether you realize it or not – coming to Maricopa is cool. Some of the hottest fun in the Valley of the Sun happens in western Pinal County. Nestled along State Route 238 west of Maricopa is a developing entertainment corridor.

It all started 50 years ago, when the Horvath family opened Arizona Soaring, a unique professional glider training and flight site.

The Stephens family purchased the Estrella Sailport, where Arizona Soaring operates, in 1987.

“My brothers and I own the place together now,” Jason Stephens said, calling the sailport a family affair.

“I could be doing a lot of other things, but this is what I want to do. I started glider-flying when I was 13; that’s when we moved down here from Alaska and that’s when my family bought the operation. I worked out here all through high school and college. I did a few other flying jobs for a while before I came back and took over the place.”

Arizona Soaring and Stephens are famous in the glider world. The Estrella Sailport is considered one of the earliest, most historic and best places in the world to go up in a glider. The weather is usually very good for gliding with high temperatures, light winds and clear skies on most days.

That is why the Horvath family built it just west of Maricopa half a century ago. Maricopa was 400 people at the time and only a dirt road connected the town to Phoenix.

Stephens was the World 2008 Unlimited Glider Champion. One of the top awards in the glider world is called the Hovarth Trophy. People from around the world travel to the Estrella Sailport to take classes or just go for a ride in a sailplanes. Trained pilots can rent sailplanes.

The aerobatic ride is an amazing, peaceful experience filled with calmness and beautiful views of the Estrella mountains and the Valley of the Sun. Suddenly, the daredevil of gliding kicks in and you are upside down doing your fifth loop-to-loop and smiling from ear to ear.

“We get customers here from all over the world. A lot of international customers come here for training or for recreational flying,” Stephens said.

Stephens is also a teaching pilot and takes many customers for rides. He teaches everything from basics to advance aerobatics. He can also be seen riding the tractor and grading the runways.

“Our No. 1 mission is to create the best pilots around,” Stephens said. “The pilots we create can go out into the world and become good, safe pilots who exercise good judgement and impress people when they travel. Most of our work here is teaching.”

He said they might have two or three riding customers a day, but they will put up 30 to 40 flights daily with classes.

“It’s been good for us, and we’ve been good for Maricopa. We have been bringing in customers from outside into this area and spending dollars for 50 years. We want to keep that going,” Stephens said.

Ak-Chin Southern Dunes hosts about 40,000 rounds of golf annually and is one of a handful of championship golf courses in the region.

Designed by Schmidt-Curley Design and Fred Couples, Southern Dunes was built in 2001 as a private men’s club. It has changed ownership a few times since, and in 2010 was purchased by the Ak-Chin Indian Community and made it into a daily-fee, public golf course.

“We don’t have memberships. We have a couple loyalty programs. We also have local pricing and different things like that,” General Manager Brady Wilson said. “It is meant to be very utopian and very democratic. We sell the times and it is first-come, first-served in the bookings.”

The Troon-managed facility consists of an 18-hole championship course and a six-hole short course dubbed #miniDunes. The site is a driving range in the morning and converts into the short course in the afternoon. All #miniDunes holes are under 100 yards.

There are no homes on the golf course.

While the course may be one of the premier championship courses in Arizona, it also caters to all skill levels of golfers, with six-sets of tees.

“We cater to female golfers, elderly golfers to novice golfers. It is meant to be for everybody,” Wilson said.

On top of golf, Ak-Chin Southern Dunes also has the Arroyo Grille.

“Arguably, probably the best restaurants in Maricopa,” Wilson said. “It is open to the public. It is here to service our golfers, but we are open for breakfast and lunch seven days a week. We serve a dinner menu Wednesday through Saturday night. Sunday, Monday and Tuesday we are still open until the last golfer and we serve the lunch menu until the end of the day.”

The chef at Arroyo Grill is “very accomplished and has become very well known,” Wilson said.

The new kid on the entertainment block is Apex Motor Club, which just built a new club track between Ak-Chin Southern Dunes and Arizona Soaring.

Apex finished the paving Phase I of their track in March. The 2.3-mile track has 12 turns on 140 acres. There is an additional 140 acres for Phase II of the project just north of the first track. Upon completion, the Apex Motor Club track will be up to 4.2 miles long.

The course is a road track, but it is a fast road track with speeds of 160 mph possible in the right car on the straightaways.

Car condos will be under construction soon as well as a clubhouse, restaurant and pool.

Apex is a private club. All styles of cars are welcome into the club including open wheel, vintage and modern cars.

“We’re not developers that are going to move on to the next city and sell this. We want to have our kids and their kids work here and have something that a lot of people can enjoy for a long period of time,” Apex President Jason Plotke said. “We want to be a vibrant part of the community.” 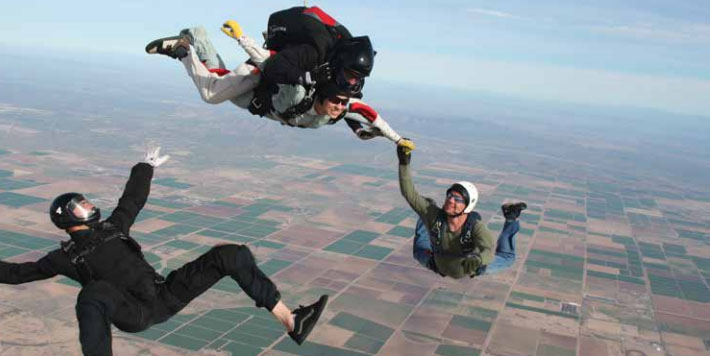 South of Arizona Soaring is Skydive Phoenix Inc., which used to be located at the glider airport but moved to have safer airspace for jumps.

For many, skydiving is a once-in-a-lifetime experience. Others discover a passion that will open a whole new world.

​Adventure sports don’t get much more extreme than leaping from an airplane in flight, and Skydive Phoenix is ultimate observation deck with views of the Phoenix skyline, Camelback Mountain and Four Peaks.

Tandem skydive jumps are the easiest, safest and most comfortable way to make your first jump. You experience all the exhilaration of skydiving, secure in knowing a trained instructor is harnessed snugly on your back.

The Accelerated Skydive Program is the most popular as it combines the tandem and Accelerated Freefall Programs. ​Skydive Phoenix also offers services for experienced jumpers.