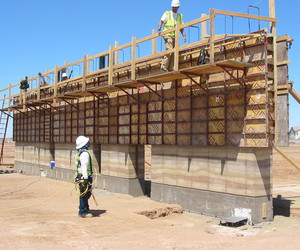 The buildings and equipment inside will be on the cutting edge, but the technology used to build many of the exterior walls at the Maricopa campus of Central Arizona College is as ancient as the Great Wall of China.

After evaluating different materials, the project team for the new campus at Bowlin and White and Parker roads — across from the city hall complex also under construction — decided to implement a building technology called rammed earth.

SmithGroup of Phoenix is the architect for the new campus and CORE Construction, also of Phoenix, is the builder.

Rammed earth refers to the process of compacting materials like dirt, sand and cement with pneumatic compressors to construct walls not only strong and long-lasting, but with a high level of insulation.

Another reason rammed earth construction was chosen is because it reflects the history of the site in Maricopa, with the Ak-Chin Indian Community and the Casa Grande Ruins nearby, according to a video about the project produced by CORE.

***ADVERTISEMENT***“They perform exactly the same except rammed earth is thicker and stronger, therefore it is more energy efficient,” she said. “An adobe building is a structure built of thousands of small earth modules. A rammed earth building is one large module with holes in it for windows and doors.”

Another advantage of rammed earth is it is low maintenance and doesn’t need to be painted.

For the CAC walls, dirt is stabilized with a 9.4 percent mix of Portland cement, Steadman said.

Steadman cautions that rammed earth is not necessarily a green technology because of the energy used to transport the materials and the equipment needed to build the walls.

“But it is green in the sense that it is very energy efficient and it will last forever,” she said.

She said this is CORE’s first rammed earth project.

David Snider, District 3 county supervisor, said rammed earth has merit for other construction projects in the county depending on the function and location.

“There are homes built within Pinal County in the last 20 or 30 years with rammed earth,” he said. “There are examples at private residences and a building at a middle school in Casa Grande.”

The 25-year master plan for the campus will enable it to accommodate more than 20,000 students with nearly 720,000 square feet. The first three buildings, with an expected 2,500 students, are scheduled to open in January.

A $99 million bond for construction was approved by voters in 2008.

Although the location is generally referred to as the Maricopa campus, an official name has not yet been adopted. CAC’s three other campus locations are named after geographic formations relative to those regions — Aravaipa, Signal Peak and Superstition Mountain.