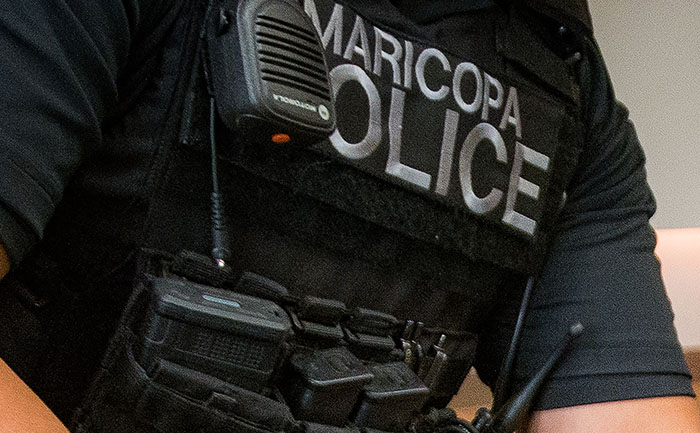 A Maricopa homeowner shot an intruder inside his house shortly after 7 p.m. Thursday in the Cobblestone subdivision.

The intruder he shot was a 43-year-old Cobblestone neighbor named Kenneth Lewis.

According to Maricopa Police Department, the homeowner shot at Lewis twice, hitting him once in the shoulder. He also told Lewis to leave before firing the shots, police said. The homeowner is not expected to be charged for the shooting, as police believe it was self-defense.

“Last night about 7 p.m. we received a phone call about an individual that had entered into a residence located on Garden Lane,” said MPD spokesman Ricardo Alvarado. “The individual had entered the residence through an unlocked garage and was confronted by the homeowners. The homeowners recognized him as being a neighbor.”

Alvarado said they told the intruder, Lewis, to leave.

Neighbor speaks about break-in that ended in shooting

Suspect moved from hospital to jail

“He complied, however he was making statements that he was being chased and was being shot at,” Alvarado said. “After he left Garden Lane, he made his way to Celtic Lane, where he made entry into another residence that was unoccupied through a service door. For some reason he took a can of food and broke out a window. He exited the window through the garage and cut his leg.”

Then Lewis went to a second house on Celtic Lane, near the house he allegedly had broken into.

“There he went into a side gate and into the rear of the residence,” Alvarado said. “He began banging on the sliding door. The homeowner was home and told him to leave. The man continued banging on the door.”

Alvarado said the homeowner, who was 68 years old, went into another room and retrieved a firearm.

Alvarado said the homeowner locked himself in a closet and called 911.

“The suspect exited the house through the garage,” Alvarado said. “He exited the garage onto the driveway. Residents from the first home he entered were actively searching for him and located him and held him down on the ground until officers arrived.”

Lewis was transported to a “hospital in the Valley” by Maricopa Fire and Medical for non-life-threatening injury to his arm, according to Alvarado.

Alvarado said Lewis will initially be charged with trespassing, but he expects more charges to be filed as the investigation continues.

The homeowner is not likely to be charged for the shooting, though that is up to the county attorney to decide.

“At this time, it looks like the individual was defending himself because he was in fear for his life,” Alvarado said.