Monsoon storms brought heavy rains and flash floods to Gila Bend this weekend. Two people died and dozens were rescued, according to the Maricopa County Sheriff’s Office. Maricopans were among those helping the town of about 2,000 people 40 miles west of Maricopa.

In a Facebook video posted Sunday, Gila Bend Mayor Chris Riggs gave “a special thanks” to groups donating time and equipment, including the Mormon church. He said, “Well over a hundred people that showed up today alone” to clean up residents’ homes and clear mud from streets and driveways.

One of those volunteers was Maricopa’s mayor, Christian Price.

“I was one of many,” Price said. “I know several of the churches here in Maricopa put together a real (big) effort to help these folks.”

Price said volunteers would “walk up to peoples’ homes and say, ‘Hey, how can we help?”

“It is eye-opening,” Price said. “You think, what’s a little mud; I can shovel that, no big deal.”

He said he worked on a front porch with his wife and son for more than an hour and “barely made a dent.”

“Probably 150 or more people there helping, just cleaning out the homes,” Morgan said. “Everything on the south side of the town was pretty much wiped out.”

Morgan said volunteers shoveled water and mud from inside homes and moved furniture to the street where bulldozers removed them. “There was mud everywhere. It is quite the mess. And they are expected to get more rain tonight.”

A state of emergency has been declared by the Town of Gila Bend, Maricopa County and State of Arizona. Buckeye Lions Foundation Inc. is raising money at Facebook to help those affected.

Maricopa’s mayor called the cleanup “absolutely exhausting work.” And it is just the beginning for Maricopa’s neighbors to the west. 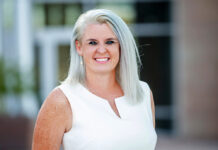