Overwhelmed. It was a term used frequently at a Monday meeting hosted by Arizona Superintendent Kathy Hoffman with school leaders and Health Director Dr. Cara Christ. It came up again Tuesday at a Maricopa Unified School District special meeting to discuss plans for the rest of the semester as COVID-19 surges in Arizona and the rest of the country.

The board is debating the feasibility of returning to all online or creating a hybrid that would have students on campus a couple days a week to lessen exposure.

While the governing board approved a new metric to determine school closures, members created a conversation that will inform next week’s decision about in-person and online education. Most schools in Arizona are seeing a corresponding surge in coronavirus cases.

MUSD has had 29 reported cases among students and staff since August and currently has an 8.22% positivity rate. Two schools closed. Saddleback Elementary returned to campus Thursday. Maricopa High School is due to re-open Monday.

That has left gaps in the teaching crew for other staff to cover.

“We’re looking at a lot of need,” Lopeman said.

Teri Louer, the district director of Exceptional Student Services, said all but two special education teachers are teaching concurrently. “Some of it isn’t working,” she said.

Secondary principals are worried over disconnect with students at home and failure rates among in-person and online students.

Thad Miller, principal at Maricopa Wells Middle School, said he is seeing the kind of mental strain in his staff that he usually doesn’t see until April. Daily lesson plans are often sidetracked by the need to cover for missing staff.

MWMS was the latest school with diagnosed cases, a student and a teacher, which caused the quarantine of several other teachers and students.

Miller said it would be nice to shut down for a while to calm the situation.

DWMS had two cases and eight teachers in quarantine.

Alvarado and McNamee said it is sometimes difficult to get students to turn on their cameras and interact during concurrent classes. McNamee said high school students at home are dealing with many distractions, especially those left in charge of helping their younger siblings engage in their online schoolwork.

“Concurrent is not ideal,” McNamee said, explaining it leaves both online and in-person students feeling neglected as the teacher works with the other group.

She suggested creating a platform for asynchronous instruction that would allow some online students to do their work on their own time.

Lopeman said she is “incredibly proud” of the staff response to the situation, noting they are dealing with new curriculum, new procedures, COVID fatigue, quarantine fatigue and “unexpected concurrent teaching.”

The secondary schools see more impact from individual cases because one student is going to six classes, and one teacher is in contact with multiple classes. It has been a different story at the elementary schools, where students mostly stay with their classes in their classrooms.

Santa Rosa Elementary Principal Eva Safranek asked the board that “when we are making huge decisions that we are looking at the different needs of the different levels.”

Santa Rosa Elementary has 52% of its students online. Those who choose to be online are doing so for very specific reasons, intimating they would not respond well to a hybrid model that would put students on campus.

At the same time, she said, elementary students, even fifth graders, are not independent learners and “still need a lot of supervision.” The in-person students appear to be doing better than those at home.

“Some kids are not turning in work. We have a harder time supporting students online,” Safranek said. “We are embracing what is now and we are taking it day-to-day.”

Santa Rosa is the only MUSD school that has not had a reported case of coronavirus and has not had to quarantine.

Butterfield Elementary has had two cases this year, with one coming out of quarantine Friday.

“We’re doing a great job at the elementary level,” said Butterfield principal Janel Hildick. “They’re happy to be back. [Bad] behavior is down.”

Online, the kindergarten through second grade experience has been different from the third through fifth grade experience. Still, Hildick is wary of changing the format.

“They can’t afford a school closure,” she said. “I think the hybrid for elementary would be a little disruptive.”

At Pima Butte Elementary, which had a couple cases of COVID-19, principal Elizabeth Allison saw eight staff members quarantined. While there have been concerns about coverage and consistency, and worries that the youngest students would not understand what was happening during coverage, the staff has stepped up to cover lunch periods and morning duties with no complaints.

“There is fear of never knowing what’s coming next,” Allison said.

Overall, 933 MUSD students have been quarantined, Lopenan said. And extracurriculars are seeing hits yet to come.

“Student participation in athletics is impacted significantly,” she said. “Eight out of 15 counties can’t participate in winter sports. We can participate to a certain degree, but we might not have any opponents.”

Pinal is one of the only seven counties that have met the metrics to begin practice for basketball, soccer and wrestling. According to Arizona Interscholastic Association, basketball and soccer are considered moderate-contact sports while wrestling is high-contact.

When last reported Nov. 4, Maricopa County was one metric short of meeting the COVID standards for practice and competition. 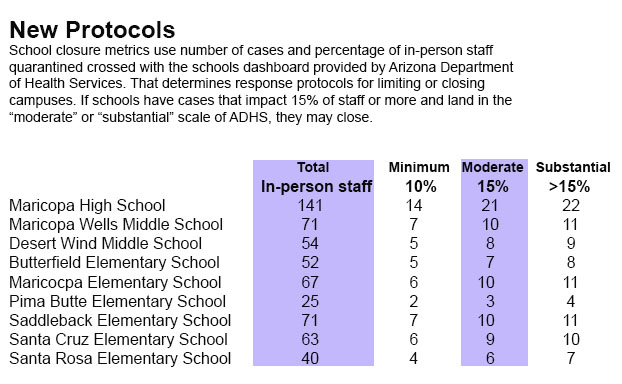