A plan for a 27-unit apartment complex raised some questions about the safety of the Porter Road corridor. 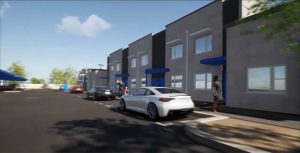 At Monday’s commission meeting, Senior Planner Ryan Wozniak said the property off Porter is “nestled into Sequoia Pathway” and will be accessible via an easement for use of an existing driveway belonging to the Sunrise Preschool.

Commissioner Jim Irving, though supporting the project, said the access is “just a dangerous accident waiting to happen.”

Wozniak said the size of the complex did not automatically trigger a traffic impact study.

“It doesn’t go over that 100 trips per peak hour that would cause additional layers of analysis to be on the backs of the applicant,” he said. “That doesn’t mean that the City itself can’t do more analysis for the corridor.”

Wozniak pointed out the speed limit for that section of Porter Road is being lowered from 45 mph to 35 mph. Commissioner Joshua Babb called that a Band-Aid.

“A few months ago, we approved another zoning and another DRP that I don’t’ think triggered a traffic impact analysis,” Babb said. “All these little ones do add up.”

Deputy Director Rodolfo Lopez said one long-range transportation plan is in place that accounted for the Porter Road corridor. It is due for an update next year, prompting studies about traffic and land uses in the area.

The apartment complex plan belongs to Kent and Chrystal O’Jon and is being designed by Lesley Partch of Fun Form Architecture. It is comprised of four buildings, two containing nine housing units each, one with five units and one with four units.

The exterior facades are planned as corrugated metal and stonework. During the meeting, Wozniak noted an ongoing negation between the O’Jons and the architect to place more stonework at the doors to soften the appearance of the entryways.

“Our objective is to develop projects that make Maricopa proud,” Chrystal O’Jon said.

The units are one-bedroom and two-bedroom apartments. The buildings have two-story units in the middle and one-story units on the ends.

The lot is on 1.69 acres at the northwest corner of the Sequoia Pathway campus. Required to have 50 parking spaces, the plan includes 55 spaces, with 27 of them covered parking.

“A key feature to what’s helping bring this site plan into conformance is the availability of private, outdoor space for every unit,” Wozniak said.

“This is a very big night for them. They are very special people,” Reynaud said.

She told the commission the O’Jons took the City’s General plan guidelines to heart.

“It was very important for Kent and Chrystal not to design what other cities have made mistakes in, allowing rectangular stucco boxes to be built… The O’Jons have dug deep. This is a long-standing, well thought-through project that we are embarking on developing with them.”