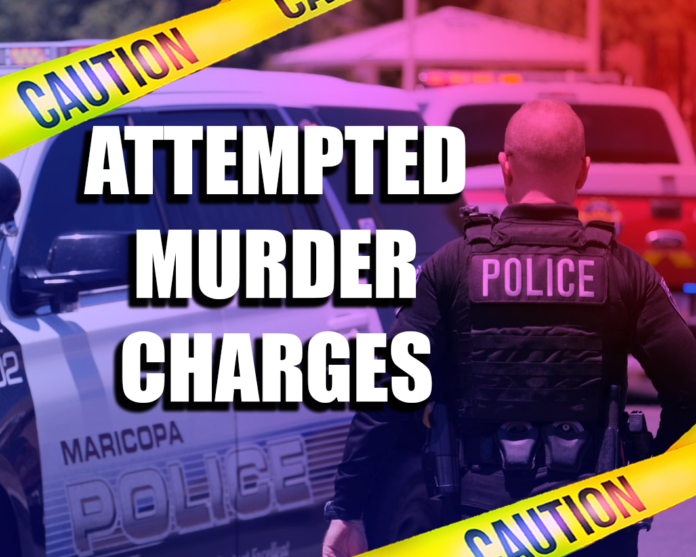 A Maricopa woman is accused of firing three shots at a former boyfriend, one of which hit his dog.

According to police documents, the shots missed her boyfriend, but hit the dog’s hind leg, which had to be amputated.

Some of the charges from the incident included attempted second-degree murder.

On January 12, at 12:18 a.m., Maricopa Police Department officers responded to reports of gunshots in the Tortosa neighborhood.

According to documents, police responded to the area but did not find any signs of a discharged firearm.

Weeks later, police got a call from a person involved in the incident.

On Feb. 6, police received a call from a man who reported that his former girlfriend, Jennifer M. Drown, 44, and himself had an argument on Jan. 11 at their home, police say.

The victim told police that he gathered up his belongings and dog and packed them into the vehicle.

According to police documents, the victim said that he noticed the safe in the master bedroom was open, where Drown’s handgun is normally kept, and that her Smith & Wesson M&P 9mm handgun was not inside.

The victim told police that Drown’s vehicle was parked directly behind his vehicle, and that he asked her to move her car, which she did.

The victim described to police how he was trying to drive away, and that Drown allegedly was driving her car in a way to prevent him from leaving, stating that he drove around the neighborhood trying to get away.

According to police documents, the victim said that he got to the intersection of West Velazquez Drive and North Costa Verdez Avenue and saw Drown’s vehicle parked on W. Velazquez Dr. with her standing outside.

The victim said that he attempted to drive eastbound on Costa Verdez Ave. past Drown, and that she shot at him three times, all of which hit his car, police say.

The victim provided police a video recording of the incident, showing his account of the shots fired, the three gunshots were fired rapidly, within two seconds, police said.

According to police, the victim’s car had three bullet strikes, one struck the front driver side wheel, the second went through the driver side door and came to rest in the passenger side door, the third hitting the C-pillar near the rear window on the driver side.

The third bullet strike, on the C-pillar, had purple coloring, the victim said that he had gifted purple tipped 9mm cartridges to Drown, which he had loaded into the handgun the last time they went shooting.

On Feb. 14, at 1:59 p.m., Jennifer M. Drown, 44, was taken into custody at Maricopa Police Department and charged with attempted second-degree murder [domestic violence], discharging a firearm at a structure, criminal damage [domestic violence], cruelty to animals, and three count of unlawful discharge of firearms.