The Maricopa Planning and Zoning Commission grilled city staff and the developer of the first apartment complex planned for the community at its Tuesday meeting.

The commission, being asked to recommend approval of the site plan, landscape, photometric and elevations for The Oasis at the Wells, ultimately tabled the project until some points of dispute could be clarified. Development Services Director Kazi Haque sparred with Chair Linda Huggins over demanding more of the developer than city code required, but it was parking that drew the most scrutiny from the panel.

The developer, the Englewood Group, asked to reduce the required number of parking spaces for the complex from 263 to 180. Planning and Zoning Manager Rodolfo Lopez said the city code came through a third party during the recession when most parking lots were seeing a mixture of uses, included RVs. He inferred that made the city’s parking requirement higher than necessary.

But it was a sticking point for the commission.

When the Englewood Group’s vice president of real estate, Brian Pozen, explained how the company arrived at the requested number – 40 years of experience and comparisons with Valley communities – Commissioner Dan Frank pointed out a large mathematical mistake in the data from Chandler.

While the paperwork showed Chandler’s parking ratio for a two-bedroom unit to be two parking spaces, it showed a three-bedroom unit to have a parking ratio of 0.25 space per unit. That caused a misrepresentation in the totals, making it appear Chandler required far few parking spaces per unit than Maricopa. Frank asked staff to fix the mistake and come back with correct numbers.

The planned complex would be on a triangle of property between Walmart and Banner Health off Porter Road. Entry points will be a future Shea Road north of the property and an easement for an existing access point off Porter from the Walmart property. Neither location has a traffic light.

Commissioner Ted Yocum said the comparisons with other communities’ parking needs did not take into account Maricopa’s status as a bedroom community with 70 percent of its residents driving out of town to work and having more car ownership.

“They meet the code,” he said. “You cannot impose something extra.”

The developer has been going by the rules laid down by the city, he said, and suddenly changing the rules was unfair to the applicant.

She said the commission wanted to set precedent in its overview of the project, knowing that other multi-family housing projects have already been proposed for other locations, ranging from condominiums to senior housing.

Pozen said 72 of the 120 units planned in the five-building Oasis complex are intended to be subsidized housing and the other 48 to be at market value. When residents alleged “affordable” housing would lead to drugs, theft and prostitution, Commissioner Joshua Babb referred to the Fair Housing Act.

“We cannot discriminate based on income,” Lopez said in agreement.

“A third of our teachers would qualify for subsidized housing,” Commissioner Jim Irving said.

Irving pressed city staff and Pozen on traffic flow. He said five schools already exist in the area – Legacy Traditional School, Central Arizona College, Saddleback Elementary School, Leading Edge Academy and Heritage Academy – and a sixth is planned – A+ Charter School, creating traffic jams before and after school. He said he assumed traffic coming out of The Oasis would only add to the northbound traffic.

Lopez said all of that was considered in the traffic impact study, but Irving was not convinced.

Neither was Tena Dugan, who spoke as a representative of the Glennwilde HOA. She said she is not against apartments but developers “need to meet the code” for parking. Dugan said the city did the same studies for the Heritage Academy site and assured residents there would be little impact. However, she said, parents are parking all over streets on and around Adam’s Way and taking over the parking in the HOA park nearby. 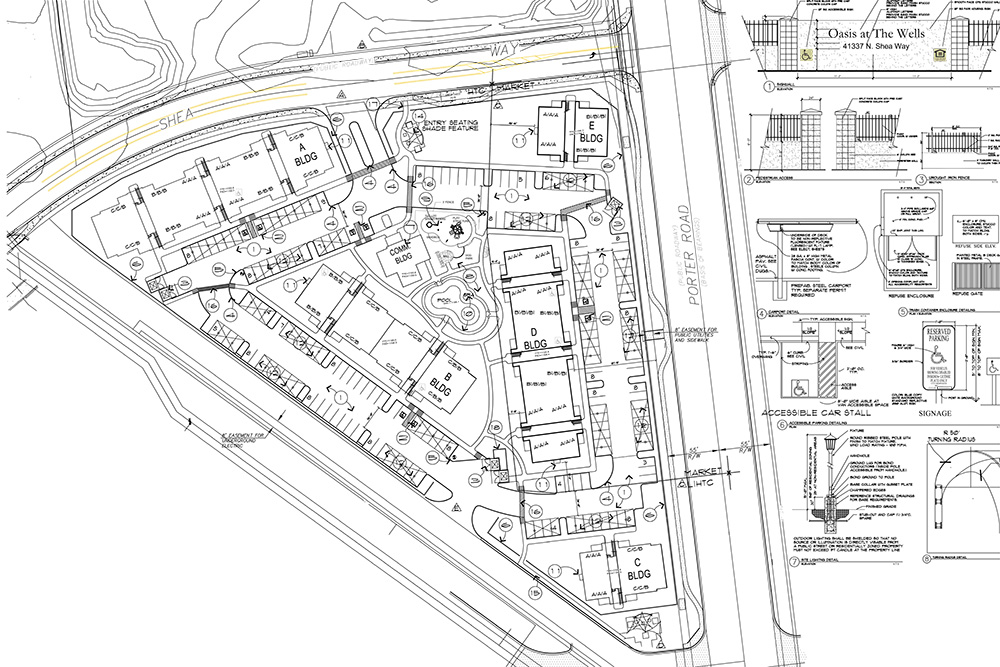