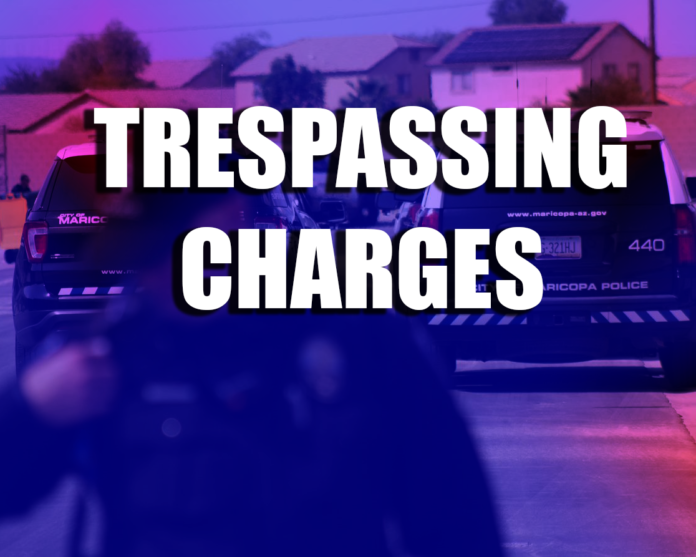 A man has been arrested in a neighborhood on the edge of city limits and charged with trespassing.

The suspect, Dustin Enos, was charged with four counts of criminal trespassing and one charge for failure to provide truthful name.

According to police documents, at 7 p.m. on January 8, Maricopa police responded to North Saddleback Vista Avenue to call about a male subject attempting to break into the caller’s residence.

The caller also gave the police a description of the male subject, who was later identified by police as Enos.

The caller later updated police, stating that Enos was hiding somewhere in their gated and locked yard.

Police received calls from neighboring properties about a male with the same descriptions that the first caller reported, trespassing onto their gated properties, all of which had “no trespassing” signs visibly posted.

Once Maricopa Police arrived, they set up a perimeter along West La Brea Road and North Saddleback Road.

While on scene, the property owner advised officers that Enos was physically in his residence, police say.

As officers closed in the perimeter, Enos was spotted running east on West La Brea Road.

Maricopa Police located Enos at another property on West La Brea Road, and when asked, the owner of that property stated he did not know Enos, and the suspect did not have permission to be on his property.

Around 8 p.m. police arrested Enos who verbally identified himself as Tyron Taylor along with a false birthdate.

After a search, police found no record for “Tyron Taylor” and asked Enos again to provide a truthful name, stating that it was a crime not to do so.

According to police, Enos then provided the same name with a birthdate, which he later changed, all coming back with no record.

Enos later admitted he lied and provided his truthful name and birthdate to a Maricopa Police Lieutenant.

A warrant check revealed that Enos has a full-extradition, no-bond U.S. Marshals warrant for robbery, along with a no extradition warrant for shoplifting in Chandler.

Enos was transported to Pinal County Detention Center and booked for his charges.