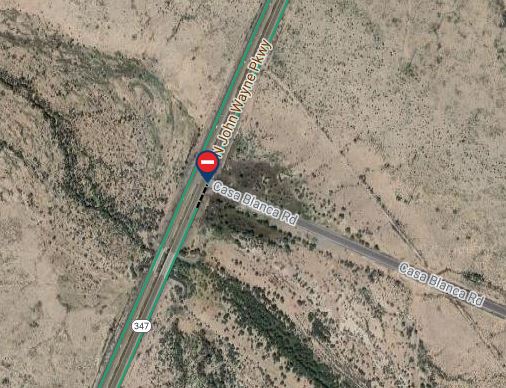 A 53-year-old man from Goodyear was killed in a single-vehicle rollover on State Route 347 overnight.

According to Arizona Department of Public Safety, the 2003 Chevrolet pickup the man was driving north went off the road near Casa Blanca Road at milepost 181. The driver apparently overcorrected, and the truck rolled. The incident happened around 10 p.m.

The driver was thrown from the vehicle and died on scene. He was the only occupant. According to DPS, he was not wearing a seatbelt. Officers are investigating whether impairment played a part in the crash.

His identity is not being released until next of kin can be informed.

1:30 AM UPDATE | The northbound lanes have reopened.

1:00 AM UPDATE | SR 347 NB is still closed at milepost 182; all traffic must exit at Casa Blanca Road. Still no estimated time to reopen the road.

11:09 PM UPDATE | Gila River Police announce DPS is working a fatal accident accident on HWY 347 at Mile Marker 182. 347 will be closed for an undetermined period of time. Traffic is being detoured at Casa Blanca Rd. Traffic is heavy in the area, drive safely and avoid the area if possible.

10:57 PM UPDATE | SR 347 NB remains closed near the Maricopa-Pinal county line, due to a serious crash. There is no estimated time to reopen the lanes.

10:25 Pm UPDATE  | SR 347 NB, near Maricopa-Pinal county line: A serious crash is on the right shoulder. Please watch for slowing in the area.

Ducey tells residents to ‘stay home’ – but no new order