City Hall is spending so much time looking ahead at projects and challenges, Mayor Christian Price said, staff doesn’t often have a chance to look back at what has transpired over the past year.

The annual State of the City address is a chance to show the community some accomplishments and what staff has been working on. The event is Wednesday at 6 p.m. at City Hall.

This year’s theme is “City of Dreams,” inspired by the baseball-fantasy movie Field of Dreams and the notion, “If you build it, they will come.” The mayor said attendees are encouraged to be casual and wear any baseball attire they wish.

Past State of the City presentations have included pseudo-skydiving, ziplining and time travel. Staff is keeping quiet on what this year’s showpiece will be.

“We want people to have a good time and learn something,” Price said. “Not something typical and boring.”

Admission is free, but attendees are asked to register to staff can get an estimate for accommodations.

State of the City is mandated by city code. Though the cost was once allocated from the city budget, it has been a fully sponsored event the past three years. Price said the City is now getting to the point it raises more money than it needs as businesses line up to be involved in the show. 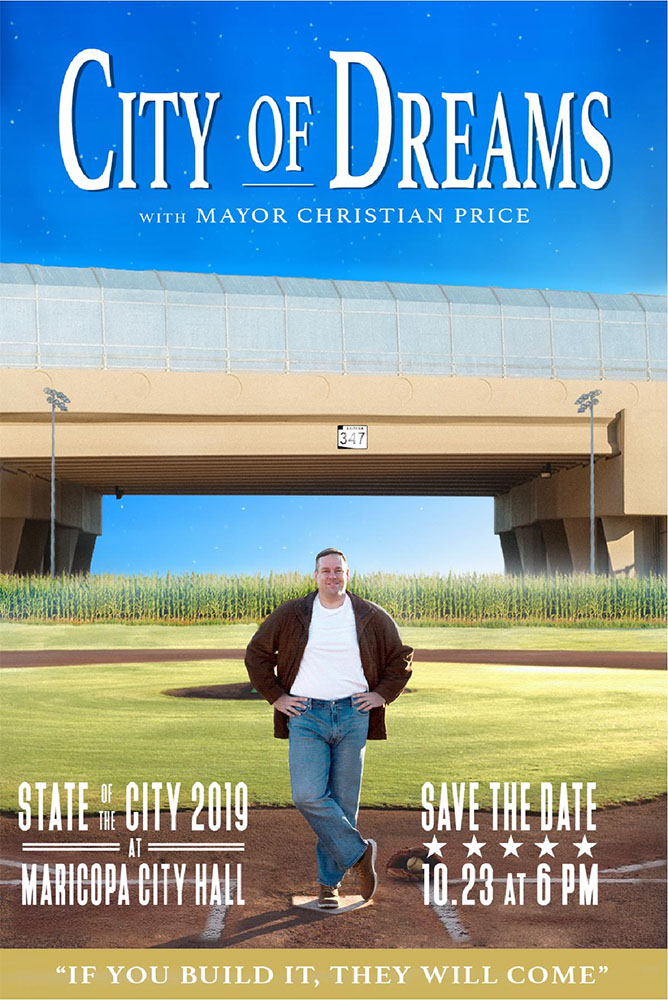 He will be talking about the completion of the overpass (final paving begins Monday), the completed, ongoing and pending commercial developments around town, City programs, impact of growth and possible future opportunities and challenges.

“We like to change it up a bit,” Price said of the presentation. “We don’t want it to be stale.”

State of the City is presented by the City of Maricopa and the Maricopa Economic Development Alliance.

More playing fields may be in Maricopa’s future