The proposed PHX Surf Park will be a tourist attraction, economic development engine and attention-getter for Maricopa.

With two 5-acre surf lagoons, a lazy river, water slides and swimming pools, it is certain to draw hordes of residents and visitors alike to cool off in the desert heat.

But in the middle of a decades-long drought in the Southwest that has led to unprecedented federal water cuts and forced Pinal County farmers to leave some fields fallow, many have expressed concern about the amount of water the park will use.

When InMaricopa reported on the surf park plan in May 2021, some readers raised doubts on Facebook about the wisdom of building a water park in the desert during a severe drought.

One reader commented: “Deep into an exceptional drought that may very well become the new normal … ‘Let’s build a water park in the middle of the desert!’ Does anyone realize the abject stupidity of even considering this folly?”

Another added: “Where in the world do they plan to get all this water from when the farmers who feed us are facing cutbacks? We don’t need the humidity it will generate when we are sweltering in 120-degree weather.”

And another reader asked: “How do you justify a water park when we need water for food. Don’t say reclaimed because you can divert that to cattle dairy farmers.”

Just last month, new Mayor Nancy Smith fielded a question about the surf park’s water usage during a mock news conference she held for students at A+ Charter Schools.

But a local water utility official and the usage reported at similar facilities suggest those concerns might be premature.

Testing the waters
PHX Surf Park, announced in May 2021, will rise on 71 acres south of State Route 238 and west of North Loma Road. It is an ambitious project with numerous amenities, including an on-site hotel, 31,000 square feet of retail space, restaurants and outdoor entertainment.

But water activities will anchor the attraction, with surf lagoons and their wave machines serving as the park’s centerpiece. In addition to surfing — even under the lights — patrons will be able to traverse water slides, glide along a “lazy river” and swimming pools.

So how much water will be required to keep hundreds of people surfing, sliding, swimming and floating every day? 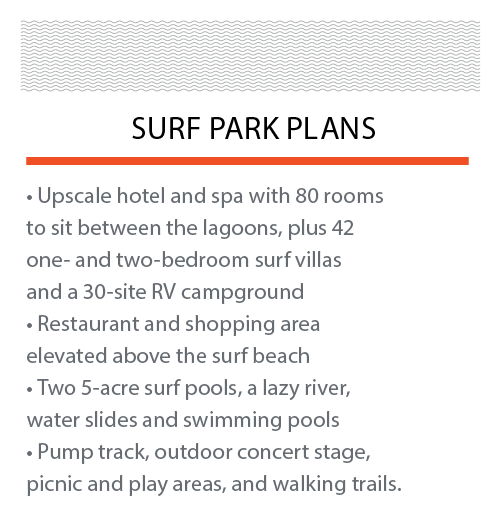 InMaricopa reached out to the developers of PHX Surf Park to get more information about the expected water usage, but company officials did not respond to multiple requests.

To get an idea of how much water might be used at the west Maricopa attraction — and attempt to answer the drought concerns raised by some in the community — InMaricopa looked at a comparable surf park to get an idea of water requirements for operation.

DSRTSurf park in Palm Desert, Calif., features a single 5.5-acre surf and wave pool, a little over half of the size of the projected size of PHX Surf Park. Because Maricopa and the Coachella Valley have similar climates, the environmental conditions are comparable.

In an August 2022 article in Wave Pool Magazine, a DSRTSurf spokesperson discussed the amount of water used annually at that park.

“Our surf pool holds roughly 7 million gallons of water,” the spokesperson told reporter Evan Quarnstrom. “Between evaporation, filtration, maintenance and other ancillary items, we will use roughly 24 million gallons each year. While this sounds like a lot, 24 million gallons is roughly equivalent to (a yearly watering of) just 1.3 holes of golf at the average 18-hole course in the Coachella Valley.”

At PHX Surf Park, about 12.7 million gallons would be needed to fill the two surf/wave pools, with a total annual usage of about 43 million gallons of water, or about 131 acre-feet of water per year.

Drop in the bucket?
Jake Lenderking, Global Water’s senior vice president of water resources and legislative affairs, said the park’s water usage isn’t as much as it might seem.

“In the grand scheme of things, it’s just not a lot of water when compared to the full city’s usage,” Lenderking said. “Maricopa is currently using only about 7,700 of its 23,000-acre-foot supply. And they are doing some unique things there that will conserve or reuse some of that amount.”

Industry expert Allen Clawson of Utah-based Cloward h20 told Wave Park Magazine evaporation accounts for about 50% of water loss at a water park. He said the rate of evaporation increases by 30% to 70% for a surf pool (as compared to regular pool) as wave action, spray and mist cause more water to be carried away by wind.

According to Lenderking, PHX Surf Park developers intend to employ a conservation method where they will use treated water from the backwashing of pool filters for irrigating the park’s landscaping. 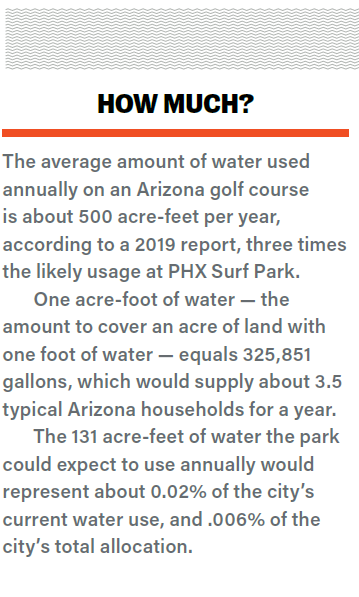 He added developers are still completing the design of the facility, and the exact water usage is impossible to gauge at this point, though it has been a topic of conversation among the developers, Global Water and the City.

Conservation has been a major concern for all parties involved, Lenderking explained.

“We have had several rounds of talks at a high level about how to make the park a wise water user,” Lenderking said “This project is big for the community, for jobs and for tourism, but we want to be sure they are seeing the broader perspective on water use, and that’s where the backwash system came up.” 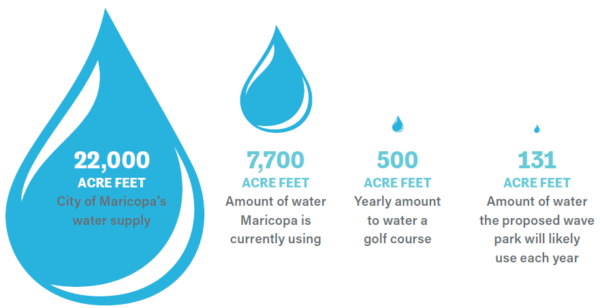 In California, which is suffering the same, if not worse, drought conditions as Arizona, three proposed wave pools have been approved to access water supplies. Thermal Beach Club and The Palm Springs Surf Club in the Coachella Valley, and Coral Mountain Surf Resort in La Quinta, have received the green light to fill their wave pools and lagoons.

This content was first published in the October edition of InMaricopa magazine.