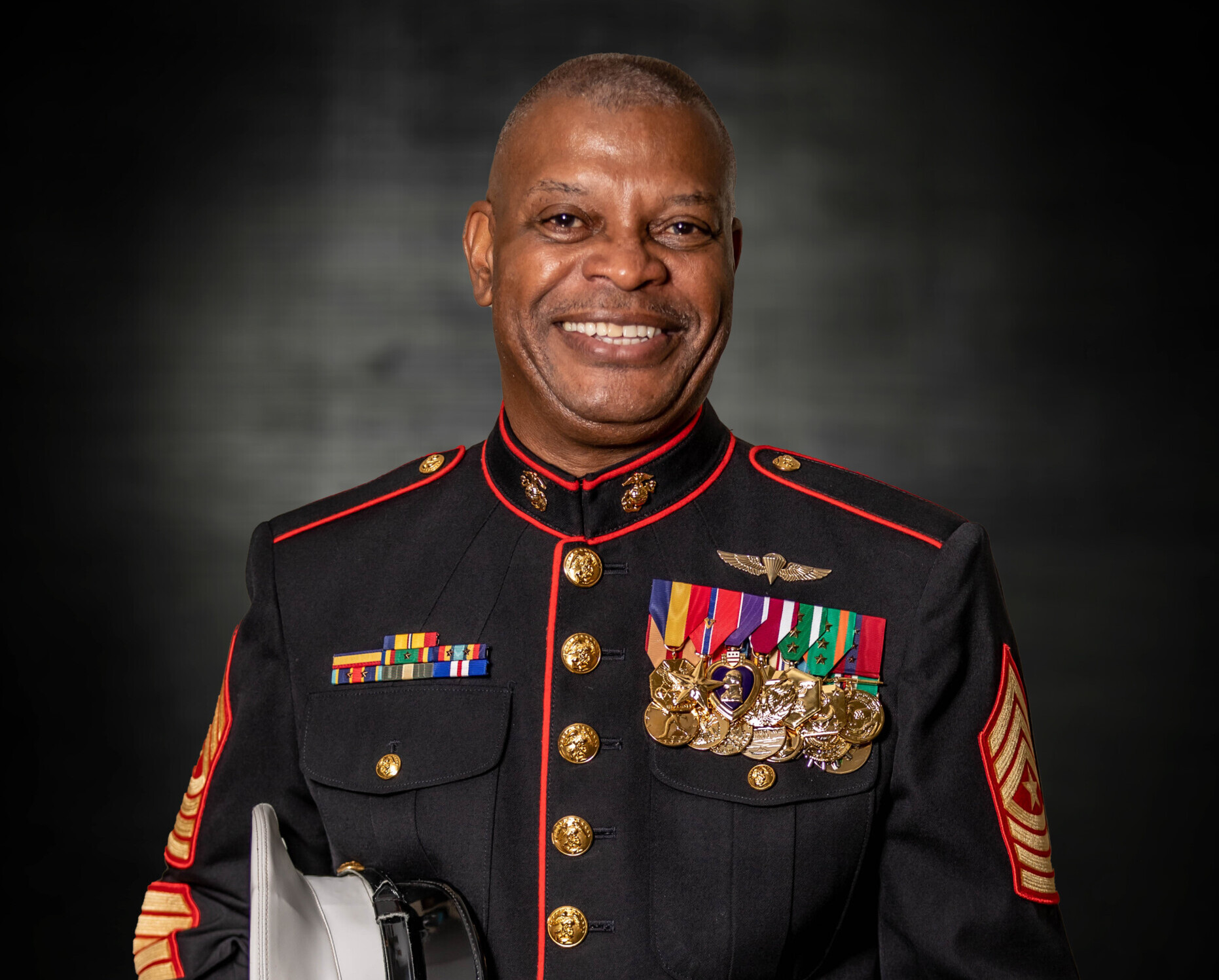 Perhaps the most important time of any Marine’s life is “The Crucible,” a 54-hour test of endurance at the end of a 99-day training camp that concludes with a 9-mile hike back to the parade field, where recruits receive an eagle, a globe and an anchor pin, which signifies they’ve earned the title of Marine.

Sgt. Major Billy Zinnerman, who was a drill instructor for part of his 25-year career in the Marines, has led nearly 4,000 recruits to this validating challenge.

Each November, we thank those who have given service to our country on Veterans Day. There can be no greater example of valor in the U.S. Armed Forces than Maricopa’s own Zinnerman, whose story is compelling.

Zinnerman was a drill instructor in San Diego.

“You’re taking these raw recruits from Iowa; Oregon; Washington state; Midland, Texas; Oklahoma, just from all over, and when you get them off the bus, they’re brand new,” Zinnerman said. “They haven’t had their hair cut or anything.

“Then you are able to turn them into Marines over a 99-day period.
That’s what it’s about.”

Training to become a Marine isn’t easy. And it was never supposed to be.

While the culmination of training is called the Crucible, the entire 99-day training session is, itself, a crucible.

The job of a drill instructor is to give recruits a thick-enough skin to get through tough situations, Zinnerman explained, adding that while the physical part of training is challenging, the mental part is at least equally important.

“That’s the lesson,” he said. “You know you can do this. You’ve been through tougher things before. This is why you are going through this, so you can have the mental capacity to do it. You’re going to have the physical ability to do it.”

While a 54-hour challenge like the Crucible might seem like the final weeding out for the Corps, Zinnerman said that wasn’t the case in his experience.

“Once recruits get to the Crucible, the graduation rate is about 90 percent,” Zinnerman said. “If they get that far, they’re going to make it. They are already there in their head.”

Most recruits who quit already have by then. Each group starts with 80 recruits and by the end, Zinnerman said, 50 to 55 typically graduate.

Drill instructors work around the clock.

“Every night, when (recruits) are in bed, you are in the office, writing different notes about each of the recruits,” Zinnerman said.

A drill instructorship is a three-year assignment. After it’s over, it’s back into a unit.

“The question is … whether you would want that recruit in your unit,” Zinnerman said. “That’s how you evaluate them.”

They remembered when he would run into them later.

“They’d say, ‘You remember me? My name is…You were my drill instructor,’” Zinnerman said. “And my answer was ‘no,’ but my thought was, ‘You’re still here, you must have done a good job.’”

After leaving the Marines, when Zinnerman took a job driving trucks, he ran into a past recruit who told his wife, Rhea: “We used to call your husband the devil!”

That interaction still makes Zinnerman and his wife chuckle.
“They never forget you,” Zinnerman said.

Small-town upbringing
Zinnerman grew up on a farm in Crowley, a small town in northwest Louisiana, where his family raised chickens and hogs.

He was taught hard work always paid off.

“I was told that coming up as a child, you could be anything you want to be,” Zinnerman said. “You just put your mind to it and work hard, and you could do that and accomplish anything.

“If your mind could conceive it, your heart will achieve it.”

He enlisted in the Marines in 1977. He wanted to learn more about himself.

“I knew that it was the most challenging — physically, mentally and spiritually — of all the military branches,” Zinnerman said. “And with me being short in stature, I just wanted to challenge myself and see if I had the mettle to be a Marine.”

While no one really knows what to expect at basic training, Zinnerman knew it wasn’t going to be easy. His older brother, Lou, was a Marine and his oldest brother, Manuel, served in the Army.

A long way from Crowley
The Marines took Zinnerman on an odyssey around the world, and far beyond his experiences as a drill instructor.

He saw time in Iraq, Afghanistan and Grenada, among other international posts.

Zinnerman was deployed to Grenada as part of the Marine Amphibious Unit for Operation Urgent Fury on Oct. 25, 1983. The invasion of Grenada at the time was the largest U.S. military operation since the Vietnam War. The 22nd MAU conducted helicopter and surface landings over three days and occupied 75% of the island, even though the Marines made up less than 20% of the total invasion force.

Following his return from Grenada, Zinnerman enrolled in underwater combat training at Coronado Island near San Diego, where Navy SEALs undergo their training. Zinnerman later was appointed to the Marine Corps Embassy Security Group, a brigade-size unit that provides security at American embassies and personal protection for high-ranking diplomats.

Zinnerman also was a high-level reconnaissance Marine, who worked on missions that were on a need-to-know basis.

“If I had a copy of my military personnel records, a lot of things would be redacted,” Zinnerman said.

Zinnerman served in Iraq during the early ’90s and in Afghanistan following the Sept. 11, 2001, terrorist attacks on the U.S.

In Iraq, Zinnerman was the company gunnery sergeant for Alpha Company Second Battalion, so he was among senior staff and commanding officers for a reconnaissance unit during Desert Storm, Iraqi Freedom and the liberation of Kuwait.

In Iraq, Zinnerman helped lead a unit that identified targets for laser-guided missiles.

“We’d find the correct target, paint it with a laser and drones would fly over and bomb it,” Zinnerman said. “We were the boots on the ground. Intelligence would tell us where it was, tell us these are the buildings that need to be hit…We’d get the job done and get out of there.”

Unfortunately for Zinnerman, those missions were seldom as simple as getting the job done and getting out. The completion of one often meant moving right on to the next.

“They say, ‘Pack up your gear and get ready to ship out,’ and then the next thing, they’re saying, ‘Let’s go to another province (of Iraq),’” he recalled.

Differing cultures
Zinnerman reflected on the cultural differences between the United States and Iraq.

“I’m a little, small-town, country boy,” he said, adding he never had been out of Louisiana before joining the Marines.

“So, you get there. It is a Muslim country. Didn’t know anything about the Muslim religion. I was raised Baptist. Their culture for women, that’s totally different.”

Zinnerman explained that while he was briefed on cultural differences, it still was a lot to take in.

“They told me to only speak to the senior of the men in their region, because the younger ones follow those leaders. So, what does that tell you?” Zinnerman said. “You have to build a relationship with the leaders.”

That included letting those leaders know that the American forces were there to help them.

“You start building trust like any relationship,” he said. “OK, we’re gonna do this for you. Do it for them.”

Zinnerman remembered when his company rescued the daughter of one of the tribal leaders who was kidnapped.

“Go get her. Bring her back,” the leader told Zinnerman. “That starts to get some solidarity there.”

Winding down
By the time his final tour ended in 2002 in Afghanistan, Zinnerman had been a Marine for 25 years. He was ready to retire.

“On my last tour,” Zinnerman said, “we were the next to ship out. We were in a valley and the helicopters were coming in and we were getting ready to hop on that gunship.”

Zinnerman was describing the Boeing Vertol CH-46, a medium-utility helicopter gunship specially developed for the Corps to support assault forces. It was often called the “egg-beater” by Marines. 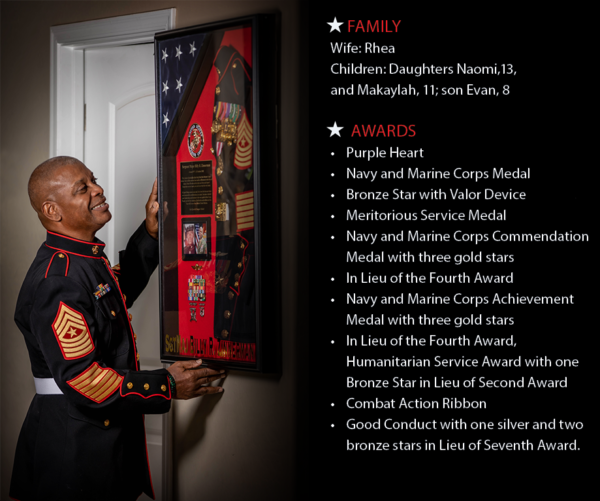 As the helicopter neared and loaded Marines, the next few moments would haunt Zinnerman to this day.

“The crew chief waves my platoon off,” Zinnerman said. “He didn’t have enough room and waved us off.”

Zinnerman and his platoon watched as the helicopter failed to gain elevation and crashed, killing everyone on board. Sand had gotten into the turboshaft engines of the helicopter and caused it to malfunction.

“I knew all 35 of those men on that gunship,” Zinnerman said. “And he waved us off.

“To watch that chopper go up and hit the side of the mountain … The first thing you think is to drop your gear and run up and see if you can save somebody.”

Zinnerman knew that tour was his last. He’d put in for retirement months earlier.

“I was done. I was tired,” Zinnerman said. “You just get worn out seeing man’s inhumanity to man, and that’s what you deal with on a day-to-day basis.”

Life afterward
Zinnerman was a busy man after his time in the armed services.

He became an ordained minister and spent time as a resident minister. He still travels across the country to speak at churches.

Zinnerman also worked for MTR Western, a company that organizes tours for people visiting the United States. The job allowed him the chance to see the country he’d defended for 25 years as a Marine.

“I’d drive from California all the way to New York and up into Canada,” Zinnerman said. “I saw the world while I was in the military and when I came home, that’s how I saw our country.”

The experience was positive.

And while Zinnerman focuses on the positive, he’s aware of certain realities that all veterans face. He’s been to four different therapists.

“I try to be nice about this,” he said. “But when I visit a therapist that doesn’t have a military background, I move on to the next one. There’s no way for that person to understand what I’ve been through and what I’ve seen.”

And when Zinnerman did find the right therapist, he started to notice that his appointments were at the end of the day. He asked why.

“The therapist told me that it was at the end of the day because he needed to go talk to someone after he talked to me,” Zinnerman said.

This content was first published in the November edition of InMaricopa magazine.