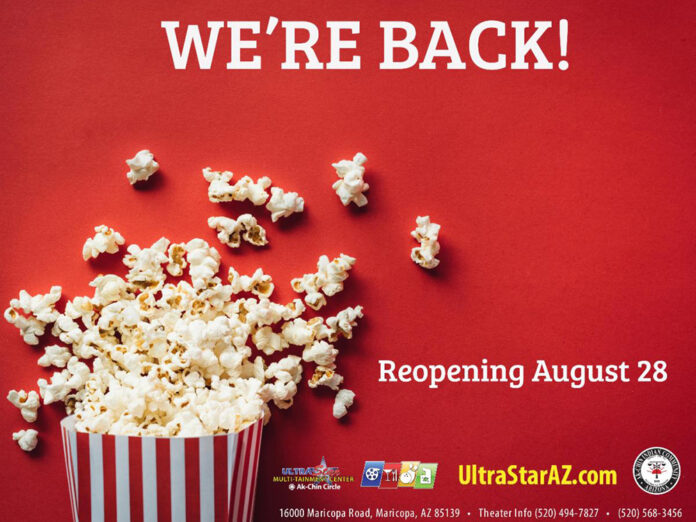 The movies will roll again Friday at UltraStar Multi-tainment Center.

The entertainment complex announced Thursday it would reopen after theaters after five-plus months in the dark during the coronavirus epidemic.

The theater will operate at reduced capacity and practice social distancing, with moviegoers required to put three empty seats between their party and others.

Concessions will be open, but patrons and staff will be required to wear masks and no drink refills will be available.

Four movies, including three new films, are on the marquee:

Unhinged: After a confrontation with an unstable man (Russell Crowe) at an intersection, a woman becomes the target of his rage. The movie opened last weekend.

The New Mutants: Five young mutants, just discovering their abilities while held in a secret facility against their will, fight to escape their past sins and save themselves in Disney’s “X-Men” spinoff. The film, starring Maisie Williams, Anya Taylor-Joy and Charlie Heaton, will have its wide opening Friday.

Bill & Ted Face the Music: Once told they’d save the universe during a time-traveling adventure, two would-be rockers from San Dimas, California find themselves as middle-aged dads still trying to crank out a hit song and fulfill their destiny. The comedy sequel, starring Keanu Reeves and Alex Winter, also launches Friday.

American Sniper: Navy S.E.A.L. sniper Chris Kyle’s pinpoint accuracy saves countless lives on the battlefield and turns him into a legend in this 2014 film directed by Clint Eastwood. Back home with his family after four tours of duty, however, Chris finds that it is the war he can’t leave behind. The movie stars Bradley Cooper and Sienna Miller.

The theater has said it will be employing CinemaSafe, a program promoting protocols and guidelines developed by leading epidemiologists.